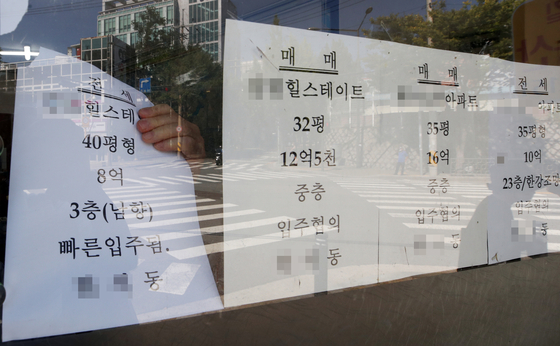 A jeonse offering post being taken down at a real estate agency in Mapo District, western Seoul, on Tuesday. Jeonse offerings have been drying up fast, especially in Gangnam District, southern Seoul, since the National Assembly passed legislation that protects tenants, including automatic extension and a cap on rent increases. [YONHAP]


A property reconstruction project that will be supported by state-owned institutions will be named soon, Finance Minister Hong Nam-ki said.

“A pilot project will be determined in December,” Hong said during a government meeting on real estate measures on Wednesday. “We are currently in the preliminary stages.”

He said there has been strong interest from the private sector despite earlier concerns.

The government in August laid out a housing supply plan, which will include 50,000 units in redevelopment projects over the next five years in an effort to cool a housing market overheated by fear of housing shortages.

One of the plans includes raising the maximum floor area ratio for reconstruction projects from 250 percent to 500 percent. This new measure allows the maximum height of the apartment to be raised from 35 stories to 50 floors.

A condition for the government approving the eased floor area ratio is the mandatory participation of state-owned housing developers Korea Land & Housing and Seoul Housing & Communities.

While the participation of these public housing companies will speed up the process by cutting back on red tape, the reconstruction projects will have to lease or sell 50 to 70 percent of the newly built apartments to low-income households, newlyweds and young people.

When the announcement was made, there was skepticism in the real estate market as to whether there would be any interest in neighborhoods that have been vying for reconstruction due to the heavy-handed intervention by the government.

Complexes that have had strong market interest for reconstruction, such as Jamsil 5 Danji or Eunma in southern Seoul, will unlikely accept the proposal, it was thought. The low returns are expected from the reconstruction if at least half the units go to the government for low-income households, newlyweds and young people, which could drive down the value of the newly built apartment.

Less popular neighborhoods, including Heukseok-dong, Dongjak District in southern Seoul, Seongbuk District, central Seoul and Yangpyeong, Gyeonggi were among 20 neighborhoods where interest was expressed in the zone-level redevelopment.

During the meeting, Finance Minister Hong said the real estate market is finally showing signs of stability, and he expects that the jeonse long-term rent market will also stabilize soon. He credited the government’s measures.

“What we should take notice of is that the purchasing sentiment that precedes the housing market price increases has started to ease,” Hong said. “There have been growing expectations on supply measures that were announced including the website for the third New Towns projects drawing more than 1 million views and the process of selecting candidates for redevelopment projects starting.”

He stressed that the purchasing frenzy in Seoul is on the decline.

Hong added that the three tenant protection legislation reforms, including automatic lease extensions and the limiting of rent increases, that passed the National Assembly in July will also contribute to stabilizing the rent crisis.

While jeonse prices have been easing, concerns of landlords no longer offering jeonse apartments are on the rise. Since the tenant protection legislations were passed, Seoul jeonse offers have declined 80 percent.

Reports of conflicts between landlords and tenants over extension rights have been on the rise.

No time for a quick fix