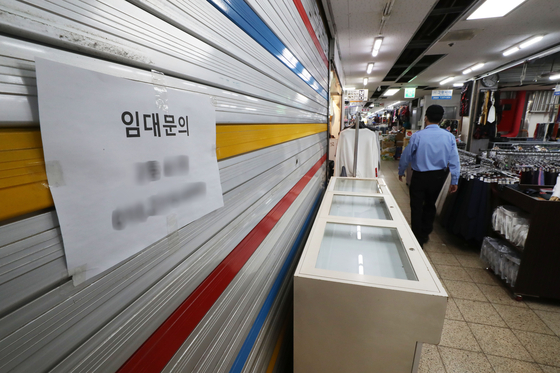 A shuttered store in Dongdaemun District, eastern Seoul, with a sign seeking new tenants is pictured on Sept. 18 as the coronavirus continues to take a heavy toll on small shops. [YONHAP]


Lawmakers in the National Assembly overwhelmingly passed a series of reforms Thursday to protect small businesses from being evicted by their landlords as the coronavirus pandemic continues to contribute to a sluggish economy.

Already given a grace period of three months of overdue rent, businesses will now be allowed to delay those rent payments for a maximum of six months.

It passed the National Assembly with 224 lawmakers of the 252 in attendance voting in favor. Only eight voted against it.

The latest reform bill, as was the case for the residential rent reforms, has been criticized as impeding landlords' personal property rights.

Additionally, the new law also allows commercial renters to demand that landlords lower the rent under the condition of business being impacted from a viral disease spread.

The broader scope now gives renters more reasons to ask for reductions in their rent. While the law does not require landlords to accept those requests, it gives tenants more legal leverage if they end up going to court with their landlords.

The DP has argued that the new legislation will protect small businesses and self-employed workers that have been heavily affected by the resurgence of the coronavirus epidemic and the subsequent tightening of social distancing restrictions.

The ruling party and the government argue that landlords will not be financially affected in the case of late payment, as they can recoup the late payment from the tenant’s deposit.

On the issue of the lowering rents, the DP and the government argued that the landlords could raise the rent to its previous level once the coronavirus ends, and there is no limit as to how much the rent could be raised later on.

They denied reports that allowable rent hikes after the pandemic would likely be limited to 5 percent, similar to the maximum cap on rent hikes for housing rents under the legislation that was passed in July.

The government also stressed that various tax incentives were given to landlords who voluntarily lower the rents in the first half and that the National Assembly is currently working on changing the legislation to extend this benefit.

But critics argue that some of the landlords are also facing difficulties, as some of them purchased buildings or stores through loans, meaning that they are also under financial pressure.

The main opposition People Power Party (PPP) on Tuesday announced that they will bring the issue to constitutional court as the reform legislation violates personal property rights.

“The legislation of the Moon Jae-in government’s real estate policies have seriously violated the people’s basic rights,” said Song Seok-jun, a PPP lawmaker. “The government is meddling in people’s personal lives, which cannot happen in a free democratic country.”

According to the Small Enterprise and Marketing Service, 21,178 stores run by self-employed workers have closed between April and June due to Covid-19.

And the trend likely intensified after the government applied stricter social distancing due to the resurgence in mid-August, the situation is likely to get worse. In a survey the service conducted at the end of August on 3,415 small-store owners, 50.6 percent said they were considering closing their business.