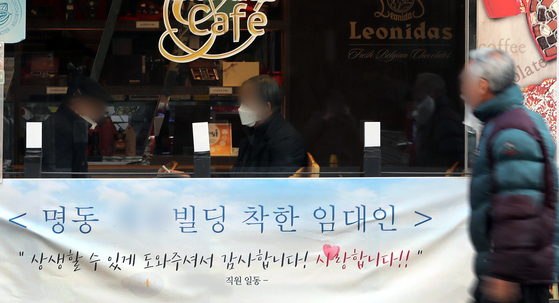 A passerby walks by a banner in Myeong-dong, central Seoul, thanking the landlord for lowering rents during the coronavirus pandemic on Feb. 24. [NEWS1]

Last year, more than 100,000 landlords voluntarily cut rents to help their tenants who were suffering amid the pandemic, according to a report released by the office of Rep. Yang Kyung-sook of the ruling Democratic Party.

The discounts were granted after the Korean government started the Nice Landlord Campaign at the beginning of 2020 as part of efforts to encourage landlords to cut the rents. The campaign aims to help small business owners and self-employed who are hit hard by the pandemic and plunging sales.

Landlords who reduced rents could receive up to 50 percent of the total amount they cut as a tax deduction from either their income tax or corporate tax. In other words, if a landlord cut rent by 10 million won ($8,750), they were qualified for a tax deduction of up to 5 million won.

Since January, the maximum deduction rose to 70 percent.

According to the report based on data from the National Tax Service, a total of 103,956 landlords, including private owners and companies, voluntarily cut the rents for their tenants last year.

A total of 180,910 tenants received the benefits. The amount of money landlords cut from rents last year totaled 473.4 billion won, according to the report, while they received a total of 236.7 billion won in tax cuts.

The remaining 4,584 landlords were companies, and they cut roughly 71.2 billion won of rents. Their taxes were reduced by 35.6 billion won.

Small- and mid-sized companies were more active in participating the campaign.

By region, Seoul topped the list with 60,137 tenants who have experienced a cut in rents followed by Gyeonggi’s 47,514. In Busan, 12,230 tenants were able to benefit from the rent cuts, while 11,592 people in Daegu received the benefits.

“I truly appreciate the many landlords who have cut the rents when many small business owners are suffering due to the Covid-19 pandemic,” Rep. Yang said. “As the government increased the maximum rate of tax reduction to 70 percent, I anticipate more people will join the campaign.”