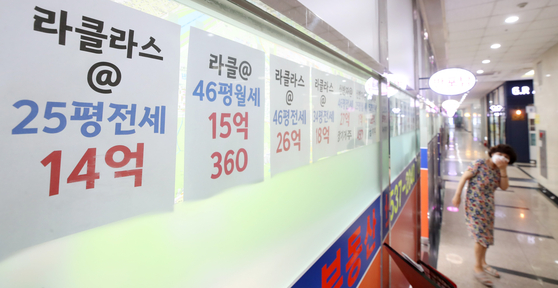 A real estate agency in Seocho, Seoul, on July 30 offers an 83 square-meter apartment for 1.4 billion won on a jeonse contract. [YONHAP]

It’s been a year since the ruling Democratic Party used its dominance in the National Assembly to force through three housing bills empowering tenants.

Since then, those who should have been helped have found themselves worse off. The laws that were supposed to protect them have just added to the challenges of housing.

Under the three tenant-protection bills, jeonse contracts are automatically extended once, jeonse prices cannot be increased by more than 5 percent at the time of automatic renewal and all such contracts have to be reported to the local government.

The only exception for automatic renewal is if the landlord decides to move into the apartment.

The government recently pat itself on the back for the three tenant protection bills, noting that 78 percent of contracts were renewed between August 2020 and May this year. That’s significantly higher than the 57.2 percent between September 2019 and August 2020.

Many people say that the statistic doesn’t tell the whole story.

In a post on the Blue House petition website on July 30, a 47-year-old man said that he and his wife have been fighting daily, adding that they have never argued in 20 years.

“At one point, we had the opportunity to buy an apartment but waited,” the petition read. “We believed the government’s promise to control housing prices.”

The author said that while waiting the price of his jeonse contract rose from 300 million won to 550 million won.

On average, jeonse prices in the past year have risen 25.3 percent.

In some apartment complexes, prices were vastly different between new contracts and those renewed, where increases are capped at 5 percent.

According to a real estate information provider Asil, as of Aug.1, new jeonse offers in Seoul fell 84 percent year on year.

The shortage of available jeonse apartments has been driving up the prices on new contracts, especially in popular neighborhoods.

In less than a month, jeonse prices have increased nearly 50 percent.

“The most urgent solution is to come up with a bold supply plan instead of policies aimed at controlling prices,” said Seo Jin-hyeong, a real estate professor at Kyung-in Women’s University.