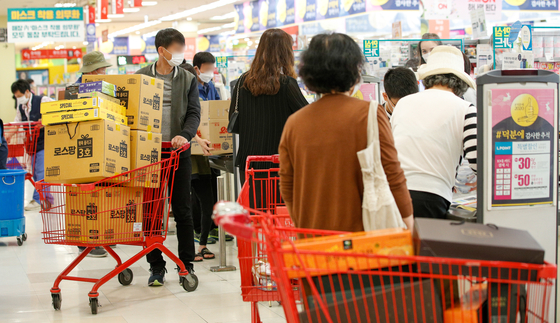 Customers line up to buy gift sets ahead of the Chuseok holidays at a discount store in Jung District, central Seoul, Sept. 24. [NEWS1]


Gift sets are flying off the shelves ahead of the Chuseok holiday as fewer people are planning to visit their families due to coronavirus concerns — and need to make up for it.

Expensive sets are particularly popular this year with a temporary lifting of the anti-graft law by the government helping boost consumption.

According to Lotte Mart, sales of Chuseok gift sets from Aug. 13 to Sept. 26 increased 22 percent compared to July 25 through Sept. 8 last year, the corresponding period ahead of last year’s Chuseok holidays.

The record-breaking sales were led by expensive meat products, of which sales jumped by 43 percent on year. Gift sets of alcoholic beverages jumped 39.2 percent on year in line with a growing number of people who prefer to drink at home. Among those, wines priced at 50,000 won ($43) to 100,000 won apparently jumped the most, although the figure wasn't disclosed.

“Many people bought expensive Korean beef gift sets for their parents to make up for their absence this Chuseok,” said a spokesperson for Lotte Shopping. "The temporary lifting of the anti-graft law, which allowed people to send gifts priced up to 200,000 won, also had an effect.”

At Lotte Department Store, gift set sales went up 5 percent compared to last year. Again, expensive gift sets sold best, with sales of alcohol, fruit sets and meat jumping an average of 15 percent on year. This is a big contrast with last year when the three most popular items were relatively low-priced items like Wagashi-style sweets and nuts. 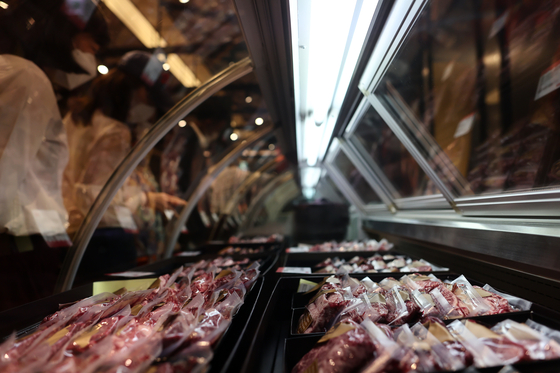 The meat section is fully stocked with high-end Korean beef ahead of the Chuseok holidays at the Shinsegae Department Store in Jung District, central Seoul, on Sept. 24. [YONHAP]


Premium gift sets performed especially well at discount retailer Emart. Gift sets of premium meat, normally priced above 200,000 won, increased by 16.4 percent compared to the same period last year. Among alcoholic beverages, whiskey gift sets — the most expensive among alcoholic beverages — sold the most with sales increasing by 13 percent compared to last year. Total sales of Chuseok gifts inched up 3 percent as of Sept. 28 on year.

“People used to think they have to buy Chuseok gifts for everyone they know,” said a spokesperson for Emart. "But now, customers prefer to spend their money wisely and focus on those they think really deserve it."

Wine was also popular at Emart, with sales rising 18.2 percent compared to the previous year. Sales of expensive bottles costing 200,000 won jumped 28 percent on year. In the case of wine sets priced over 1 million won, sales jumped a whopping 40 percent on year.

“Expensive wine consumption has grown as more people could not dine out or go on trips overseas during the holiday season. That demand trickled down to discount stores,” said the Emart spokesperson.

Sales jumped for all types of alcohol. Gift sets of imported beer jumped 64.2 percent on year and traditional liquor sales leaped by 95.4 percent.

“Premium gift sets performed well with more people giving up their annual visit to their relatives. Health supplements sold well as more people were concerned about staying healthy from the pandemic. The jump in wine sales was a result of more customers opting to drink at home rather than go out to bars,” explained Choi Hoon-hak, a marketer at Emart.

With the temporary lifting of the anti-graft law, the government has hinted at the possibility it might keep the suspension going to help farmers struggling from the pandemic.

“We will conduct a careful analysis to see how much of a positive effect the temporary suspension of the anti-graft law had in boosting sales,” said the Minister of Agriculture, Food and Rural Affairs at a meeting Monday.