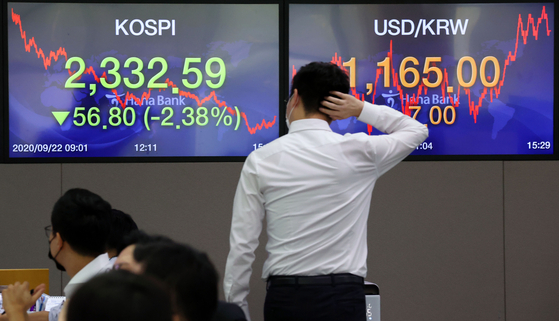 A screen shows the closing figure for the Kospi in a trading room at Hana Bank in Jung District, central Seoul, on Sept. 22. [YONHAP]


With the government planning to increase taxes on retail investors, Koreans are scrambling to offload their stocks in a bid to evade the new charges.

Under the revised enforcement ordinances of Korea's Income Tax Act, which is set to come into effect in April 2021, the government will collect taxes from individuals who own more than 300 million won ($256,000) in stocks of a single entity, or over 1 percent of the total shares. The tax will be set between 22 percent and 27.5 percent of gains on transfers, depending on the size of profits.

Until recently, only people who own 1 billion won of a single stock were obliged to pay the taxes, as they are categorized as a major shareholder. The government plans to add more retail investors to the category.

Regarding the sudden increase in taxes, retail investors are expressing frustration. Some are already selling off their shares to avoid the extra charge.

“When the average selling price of an apartment is Seoul is at about 1 billion won, how can a person who owns only 300 million won in shares be considered a ‘major shareholder?’” Lee Moon-sook, a 51-year-old retail investor, said. “I guess it’s time to sell off all my shares.”

The Korea Stockholders Alliance held a press conference in front of the government complex in Sejong on Sept. 25, voicing its opposition to the revision.

“[If the country’s revised law goes into effect,] many retail investors will have to suffer from a sharp decline in stock prices as more people sell their shares,” said a spokesperson from the alliance during the conference.

A Blue House petition gained over 95,000 signatures as of Sept. 27, expressing strong opposition to the law.

In a response, Rep. Kim Byung-wook of the ruling Democratic Party (DP) said in a Facebook post on Sunday that he will surely do something to “delay the enforcement decree."

Kim also said the country should approach the issue from two major perspectives, emphasizing that “we should think about how we can move the money that is currently tied up in real estate to the stock market, as well as how we can overcome the so-called Korea discount.”

However, the National Assembly’s Strategy and Finance Committee has not indicated any plan to revise the law. According to a source from the DP, the party has not discussed postponing the law with the committee.

Experts say that the Ministry of Economy and Finance is not likely to revise the policy at this time when the country’s financial situation is getting worse due to the prolonged Covid-19 pandemic as the law is a good chance to collect more taxes which will eventually help the economy.

“The Ministry of Economy and Finance is following the basic principle that ‘taxation must occur where income occurs’,” a source from the DP said. “However, the Financial Services Commission worries about the future of [the stock market] which will see a sharp decline [due to the revised law].”