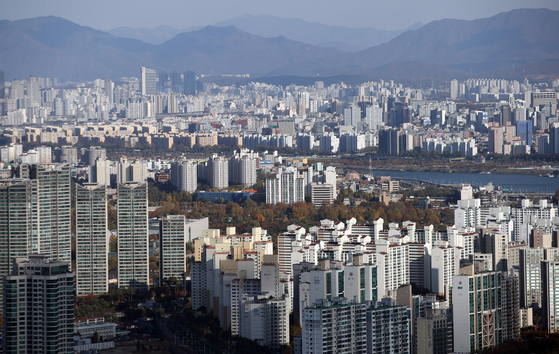 The ruling party gave into the government on a real estate tax issue in exchange for the government making a concession on a capital gains tax change, which it is dropping.

The government will lower property taxes on people who own a single apartment with an assessed value of 600 million won ($529,000) or less. The ruling party had wanted the value to be 900 million won or less.

Meanwhile, the government earlier announced that it would impose a maximum 33 percent tax on investors who invest 300 million won or more in a single stock starting April next year, down from 1 billion won. The DP wanted the amount to remain at 1 billion won, and the government caved in.

The government made the announcement on both issues on Tuesday.

It said it was lowering property taxes for people with apartments assessed at 600 million won from between 0.1 percent and 0.4 percent to between 0.05 percent and 0.35 percent.

The cut will be applied until 2023 and the rate could be raised again depending on the market situation. Local governments will forfeit 478.5 billion won in taxes every year due to the change. In three years that would amount to roughly 1.44 trillion won.

The Democratic Party was demanding the bar to be raised to 900 million won to benefit more homeowners.

The lowering of property taxes is an issue because the government is working on a plan that would raise the assessed value of properties, which will increase tax bills. The plan is to raise assessed values to 90 percent of market values by 2030.

The government has already raised the assessed values of the most expensive apartments this year.

For apartments with market values 3 billion won or higher, the assessed values are now 80 percent of the market values.

The assessed values of all apartments this year rose 5.99 percent compared to the previous year, slightly more than in 2019 when it rose 5.23 percent year-on-year.

Seoul saw the sharpest year-on-year in its assessed values, which went up 14.75 percent, triple the national average.

Due to the higher assessed values, homeowners in Seoul saw property taxes paid to the Seoul city government rise 20.7 percent year-on-year, or by a cumulative total of 242.7 billion won.

The Democratic Party wanted the government to raise the bar on property tax to 900 million won and keep the current capital gains tax. It worried about its popularity especially when it just announced it would contest next year’s mayoral by-election in Seoul and Busan, where the most expensive apartments are.

A high-ranking government official who requested anonymity said Moon was adamant about keeping the bar at 600 million won as raising the bar to 900 million won could undermine his administration’s real estate cooling measures.

There was strong opposition from local government because of the effect on tax collections.

On the capital gains tax, the ruling party didn't want to lose the vote of major stock investors.

It has been estimated that there are roughly 88,000 investors who have more than 300 million won and less than 1 billion won invested in a single stock. Total investment by these investors is estimated at 41.6 trillion won.