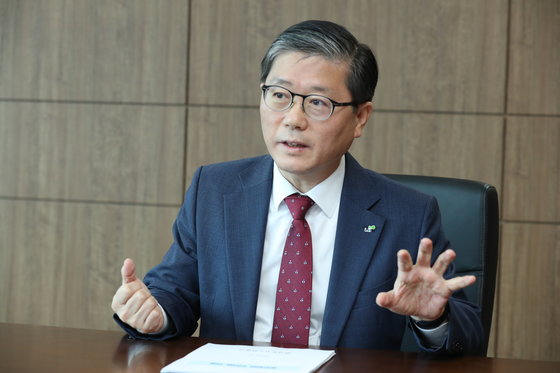 
“There is enough land to build apartments,” Byeon said, during a recent interview with the JoongAng Ilbo.

But the chaos in the real estate market, which includes Seoul, continues. The steep upward trajectory for housing price appears to have passed its peak, but record prices are still emerging. The average jeonse, or long-term housing rental deposit, price for apartments in Seoul has been on the rise for a year and five months, while prices have been jumping for low-rise multi-unit housing and officetels.

Experts have consistently argued cooling off the market requires an increase in supply, especially in the greater Seoul area.

As part of the Aug. 8 measures, the government said it would provide housing for 132,000 households, 70 percent of which are in the hands of the state-run LH.

Byeon recently sat down with the JoongAng Ilbo to share his perspective on the local real estate market.


Q. What do you mean when you say there’s a sufficient supply of housing in Seoul?

A. I have looked into numerous statistics. In the last three years, on average, the number of apartments that have gone into construction or been completed in Seoul has been slightly higher than the average between 2013 and 2016.

On average, 43,000 households have moved into the newly constructed apartments in each of the last three years. That’s higher than the 32,000 annual average between 2013 and 2016. However, there are perceptions that there is shortage in the supply of apartments in Seoul because of regulations. They are mostly psychological concerns.


Q. One of the major tools that could be used to supply apartments in Seoul is reconstruction and major [zone-level] redevelopment that is currently restricted by regulations. Wouldn’t a slight lifting of regulations help?

A. The government is well aware [of this option]. However, the risks of having apartment prices hiking up as a result of deregulation is too high. For example, raising the floor-area ratio will immediately have the effect of increasing the number of apartments that could be supplied. However, the additional units that will be built [from reconstruction or district redevelopment] will result in raising the prices of the apartments, which will lead to raising the housing prices of surrounding neighborhoods.

This is not a problem limited to the apartment complex that is reconstructed or redeveloped, as it will have an immediate ripple effect on the overall housing market. This is because unlike overseas, where there are different types of housing, in Korea, there’s not many options.


Q. Is there a way to increase housing supply in Seoul besides reconstruction or redevelopment measures?

A. It is true there is a shortage of land in Seoul to build houses. However, there are many ways to supply new houses.
One such way is to develop transit-friendly neighborhoods or jjokbangchon — neighborhoods with small houses whose rooms are divided into smaller spaces for accommodating low-income people.

In Seoul alone there are 300 subway stations. These areas surprisingly have low floor-area ratios.

We could utilize these areas in supplying houses.

It’s the same with jjokbangchon, where there’s a high concentration of two- to three-story housing. In the past when we talked about improving the housing environment, the focus was on making small minor changes like changing the door knobs. But today the government can purchase the land and build new houses.

LH is currently carrying out restoration projects in five jjokbangchons in Seoul including Yongsan.

While 30 percent of the city land in New York is used for residential purposes, in Seoul it’s less than 5 percent. One shouldn’t worry about housing supplies in Seoul.


Q. The government’s real estate measure on Aug. 4 included a reconstruction and zone-level redevelopment that involved the intervention of the government in supplying apartments in the greater Seoul area. However, there are concerns as these projects, in order to be executed, need the willing participation of the private sector. Is it not because of the government intervention that participation from the private sector is low?


A. Whether it is reconstruction or a zone-level redevelopment, basically it is a project where the landlords exercise their personal property rights.

However, because it has to be approved by the government, it is a public-interest project.

And as such the public-interest developer must play an aggressive role.

However, there’s a widely accepted perception that reconstruction and redevelopment is a real estate investment development business, which is wrong.

If the public interest entity leads, it will immediately reduce the financial costs [of the reconstruction and redevelopment project]. Various application and licensing process will be shortened and there will be no room for conflict [among landlords] creating corruption.

If we actively inform the members of the reconstruction and redevelopment projects, we expect participation [from the private sector] to increase.


Q. Will the third generation of new towns help stabilize the housing prices in Seoul?

A. The new towns closely border Seoul. Changneung in Goyang, Gyeonggi, Gyeyang in Incheon and Daejang in Bucheon borders Seoul. Gyosan in Hanam is only 2.2 kilometers (1.4 miles) from Seoul and Wangsook in Namyangju is only 3.5 kilometers from Seoul.

However, because many of the development-restricted zones [greenbelt] are located between these new towns and Seoul, many people feel as though they are located far from Seoul and feel unfamiliar.

Yet as all have major public transportation, it only takes 30 minutes to travel to major areas within Seoul.

Wangsook in Namyangju alone has six rail lines. It takes only 15 minutes to travel to Seoul Station, 20 minutes to Yeouido and Gangnam.

We could expect the new towns to disperse the housing concentration in Seoul.

A. Yes, there is a possibility that jeonse prices would go up, [contributing to the shortage of such long-term rental apartments while their apartment is being built]. However, as these people continue to live in jeonse, they wouldn’t buy an apartment, which will contribute to keeping a lid on Seoul apartment prices.


Q. The anxiety of people who don’t own a house is high, and has resulted in recent panic-buying.

A. There is a huge flow in the housing market, where once the recovery and upturn period ends, a sharp decline happens. When the first and second new towns were supplied [between the late 1980s and early 1990s] and the third new towns were created [in the mid-2000s] apartment prices for seven to eight years were on the decline.

Until 2022, 370,000 units, which accounts for 44 percent of apartments that are to be supplied under the third new town projects, will be supplied. The opportunities for those that don’t currently own homes will grow significantly. They shouldn’t be nervous.