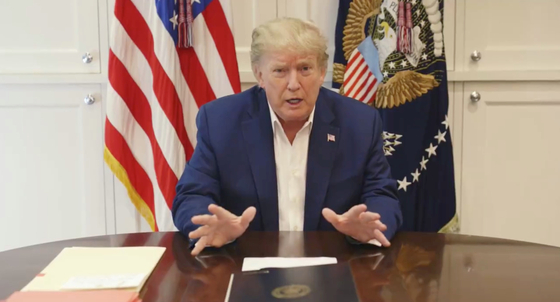 U.S. President Donald Trump, who is being treated for Covid-19 in a military hospital outside Washington, speaks from his hospital room, in this still image taken from a video supplied by the White House, Oct. 3, 2020. [REUTERS/YONHAP]

Pompeo will still be traveling to Tokyo, Japan, from Oct. 4 to 6 to attend a foreign ministers’ meeting with other members of the Quadrilateral Security Dialogue, also known as Quad, read a department statement, but a planned trip to Seoul was apparently removed from the itinerary.

Last month, officials in Seoul said Pompeo was expected to visit South Korea for two days from Oct. 7 to discuss regional security issues and denuclearization negotiations with North Korea, which would have been his first visit to the country in two years.

No official explanation was provided for the rescheduling, though the decision may be linked to Trump's positive test result, announced early Thursday.

Pompeo was, however, expecting to travel to Asia again in October — “now just a few weeks off,” according to a State Department release.

South Korea’s Foreign Ministry on Sunday said it received notification of the scheduling change from Washington, adding it looked forward to a visit from the secretary as soon as possible.

The U.S. chief diplomat’s canceled trip to Seoul stands as just one of many foreign policy complications stemming from Trump’s Covid-19 diagnosis, which plunged Washington into confusion and raised alarm about the security implications of the president’s illness so close to a presidential election.

Trump received a litany of sympathetic get-well messages from leaders around the world, including one from North Korean leader Kim Jong-un, who state media said wished the president and first lady swift recoveries.

“He sincerely hoped that they would be recovered as soon as possible. He hoped they will surely overcome it,” said an English-language report from the official Korean Central News Agency (KCNA).

The White House has not confirmed it has received Kim’s message.

Trump is currently undergoing treatment at Walter Reed National Military Medical Center in Maryland, and appeared in a video message Saturday in which he said he was feeling better and would continue campaigning for his reelection this November.

Kim’s message appears to be aimed at just that, expressing goodwill toward Trump in the chance that the firebrand president is kept in office by American voters next month, though polls predict his chances are narrower than his Democratic Party rival Joe Biden.

The two heads of state are well known pen pals, exchanging dozens of letters in between their three meetings throughout 2018 to 2019, which journalist Bob Woodward described as containing fawning expressions and phrases resembling medieval “declarations of personal fealty.”

Such personal chemistry aside, no deal emerged between Pyongyang and Washington throughout the course of the three summits due to their unbridgeable positions about the scope and sequencing of North Korea’s denuclearization process.

But the letters continued to be traded, with Trump in March offering U.S. assistance to the North on combatting the coronavirus pandemic.

Washington has also extended such a proposal through other diplomatic channels between the two countries, but so far no reply has materialized from Pyongyang, which insists it has no Covid-19 cases on its soil.

Trump’s illness is likely to complicate the process further, effectively ruling out the option of high-level negotiations with the North and delaying discussions with South Korea on the matter.