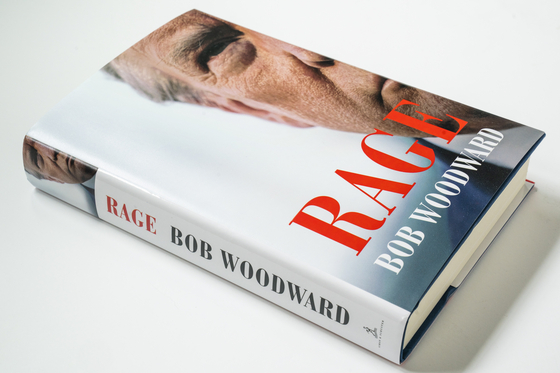 
In late 2017, U.S. Secretary of Defense James Mattis was weighing the consequences of a nuclear war on the Korean Peninsula for the defense of the United States.

“This weighed heavily on me every day. I had to consider every day this could happen,” Mattis told journalist Bob Woodward about that period, as U.S. President Donald Trump was threatening “fire and fury” against North Korea in response to its nuclear and missile provocations that year.

“This was not a theoretical concern.”

Months later such apprehension would give way to shock and awe of a different kind, when Trump began one of the oddest political romances in history with the regime’s reclusive leader, Kim Jong-un.

Written with unprecedented access to Trump, Woodward’s new book, “Rage,” describes the relationship as “personal and emotional” — embodied in 25 “love letters” exchanged between the two leaders throughout 2018 and 2019 as their countries negotiated the supposed disarmament of the North and its nuclear weapons program.

The letters from Kim were “masterpieces,” Woodward says, adding that they impressed C.I.A. analysts with “the exact mixture of flattery while appealing to Trump’s sense of grandiosity and being center stage in history.”

One such letter, Woodward writes, delivered to Trump by U.S. Secretary of State Mike Pompeo after his first visit to Pyongyang in April 2018, paved the way to the first Trump-Kim summit in Singapore that June, after which the president declared on Twitter there was “no longer a Nuclear Threat from North Korea."

Though laden with what Woodward calls medieval “declarations of personal fealty,” the duo’s correspondence following Singapore gave them means to outline their conditions prior to another meeting.

In a Sept. 6 letter, for example, Kim declared he was willing to “take further meaningful steps one at a time in a phased manner such as the complete shutdown of the Nuclear Weapons Institute or the Satellite Launch District and the irreversible closure of the nuclear materials production facility,” Woodward writes.

Woodward gives no further details as to what Kim asked for in return in the letter.

But the proposal to undertake the process gradually was again presented by Kim in Hanoi, Vietnam, at the second summit in February 2019, where he offered to scrap the Yongbyon Nuclear Scientific Research Center in exchange for sanctions relief on five counts particularly damaging to the country’s economy.

Trump rejected the offer, Woodward writes, instead calling on Kim to give up all of the regime’s nuclear sites, which Trump said numbered five.

“The look on Kim’s face was utter shock” as Trump walked out of their summit prematurely, without signing an agreement or even attending a state dinner, according to Woodward.

Though the Hanoi debacle left negotiations in a deadlock from which they have yet to recover, the two leaders’ further correspondence enabled a third meeting in June 2019, after Trump extended an invitation to meet with Kim at the demilitarized zone (DMZ) during his visit to South Korea. That event gave Trump his much sought-after photo opportunity, but no substantive outcome, Woodward writes.

Testifying to his disappointment at the lack of progress, Kim wrote his longest letter to Trump on Aug. 5 that year, described by Woodward as sounding like it was from a jilted lover.

Following the usual pleasantries, Kim decried the continuation of combined military exercises between South Korea and the United States, accusing them of targeting the North’s military. Following their first summit, Trump had made public his decision to end joint drills with Seoul.

Kim continued, “I am clearly offended and I do not want to hide this feeling from you. I am really, very offended.”

It is not known what Trump replied to the letter, which he publicly described as “very positive” and “beautiful.” That November, however, the Pentagon announced it had suspended its annual wintertime exercises with the South to support diplomatic efforts with Pyongyang.

Woodward’s account also describes in detail Trump’s distaste for not only the exercises — or “war games” as he called them — but also the presence of U.S. troops in South Korea, which he has repeatedly questioned in public.

Trump at one point even remarked South Korea continues to depend on the United States for its very existence, Woodward writes, noting just how drastically the president’s view of the alliance departed from conventional military belief in Washington. On several occasions, both in Woodward's account and publicly, Trump has questioned the usefulness of the U.S. military alliance with Seoul.

In one anecdote, as he flew over Seoul in his presidential chopper with U.S. Forces Korea Commander Gen. Vincent Brooks during a 2017 state visit to the South, Trump pointed to Samsung’s campus in the city and complained that the United States was “paying for all of this” while South Korea should be.

Brooks attempted to convey South Korea’s extensive financial contribution to the alliance by showing Trump around Camp Humphreys, which was built almost entirely with Seoul’s financing of around $10 billion, but apparently did little to convince the president.

Under Trump, the United States has been negotiating a major hike to South Korea’s contribution to the alliance far beyond the approximately $870 billion Seoul paid in a 2019 agreement for the upkeep of around 28,500 U.S. troops on the peninsula.

But fundamental disagreements over the hike has kept the talks frozen for months, and its outcome hinges upon the results of Trump’s re-election bid in November.

Interestingly, Pyongyang’s objections may be less of an obstacle to the future of U.S. military presence on the peninsula than Trump’s personal views. According to Woodward, Pompeo concluded Kim wanted U.S. troops in the South because “they were a restraint on China” — an opinion which the North’s past leaders have conveyed to Washington in past occasions.

As a whole, Woodward credits Trump for averting war with North Korea through his unconventional diplomacy with Kim, though he maintains doubt about the sustainability of this relationship post-Trump.

With the president’s mind fixated on his dwindling re-election prospects, Pyongyang has reverted to a state of hostility, severing its ties with the South and demolishing its liaison office with Seoul.

But like Trump, it, too, has faced a seemingly intractable problem in the Covid-19 pandemic, which forced it to shut its borders with China, its main trade partner.

According to Woodward, White House Deputy National Security Adviser Matt Pottinger believed in February that the coronavirus was “probably doing more to advance our maximum pressure campaign [against North Korea] than anything at the moment,” signaling a confidence that the virus may bring Pyongyang to its knees faster than U.S. pressure.

“Rage” is set to be published in the United States on Tuesday. It is Woodward’s second book on the Trump administration, after “Fear,” released in 2018.