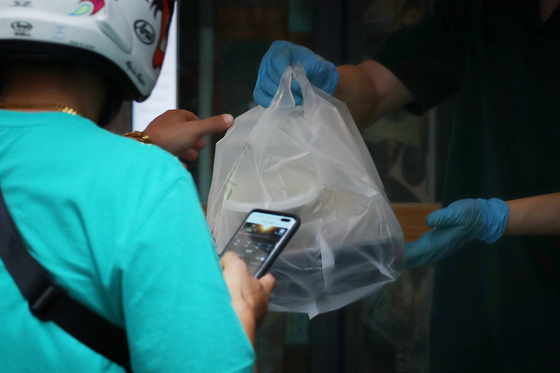 A delivery rider delivers a packaged meal to a customer last month. As social distancing continues, the number of online transactions for food delivery has skyrocketed over recent months. [YONHAP]

According to data from Statistics Korea released Monday, total shopping transactions online in August amounted to 14.38 trillion won, a 27.5 percent jump from the same period a year ago.

Of that, transactions made on mobile jumped 27.8 percent on year to 9.33 trillion won, accounting for 64.8 percent of the online shopping transactions in August. The proportion of mobile shopping in the same month last year was 64.7 percent.

August marked the first time that monthly online transactions have surpassed 14 trillion won since Statistics Korea started collecting data in January 2013. Online transactions reached a record high in July, but that record was broken in just a month.

As people spent more time at home due to the continued Covid-19 pandemic, household items, including furniture, saw a 59.3 percent growth in online transactions, followed by household and electronic devices, with 48.8 percent.

Purchases related to cultural and leisure services, including movie theaters, dipped 56.7 percent during the same period, while travel and transportation services similarly declined 51.4 percent, despite the vacation season in August.

Online purchases of cars and related items, like navigation systems and engine oil, increased 92 percent on year. Tesla, which only sells cars online, is seen to have contributed to that growth. Statistics Korea did not mention a specific brand, but its spokesperson said the recent popularity of electric vehicles has raised the number of people purchasing cars online.

Emart products to be sold on Naver Market Shopping