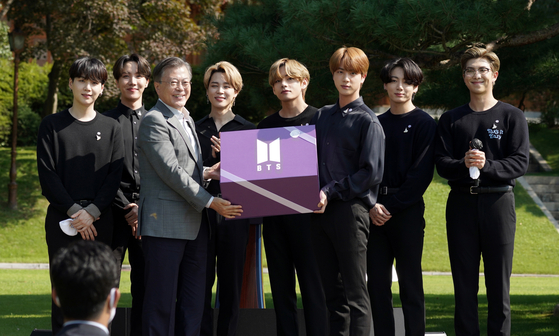 
The ruling party on Monday floated the possibility of offering the members of K-pop group BTS an alternative to their required military service as a thank-you for the boy band's massive economic and cultural impact.

“We are expecting to see 60 trillion won [$51.7 billion] worth of economic gains over a decade — 6 trillion won alone for this year — from the K-pop stars of BTS,” Rep. Noh Woong-rae, a member of the Supreme Council of the ruling Democratic Party (DP), said during the Monday leadership meeting.

“When BTS topped the Billboard Hot 100, we saw about 1.7 trillion won in economic effects,” he continued. “Their role in boosting Korea’s prestige to the world is impossible to measure. We must start a serious discussion on offering special arrangements for military conscription to its members.”

“Military duty is sacred, but not everyone has to hold a rifle,” Noh said. “Engineers, classic artists [and athletes] have alternative programs, but pop culture artists are not covered.”

Noh proposed that BTS be drafted for state projects such as a campaign to promote the Dokdo islets — a disputed territory to which Japan lays competing claims — to the international community in exchange for serving their military duty traditionally.

Offering a special volunteer program to replace conscription for pop artists such as BTS members would require a revision to the Military Service Act.

As of now, the government offers alternative programs to classic artists, athletes, engineers, scientists and technology researchers to utilize their talents. They serve in various volunteer programs if they possess certain qualifications.

Athletes who won Olympic medals or gold medals in the Asian Games are granted exemptions from military service. Award-winning classical artists, such as pianists and directors, are also eligible for exemptions.

Last month, the DP proposed a bill to revise the Military Service Act to allow pop artists to delay their enlistments. The bill, sponsored by Rep. Jeon Yong-gi, is currently pending before the National Assembly’s National Defense Committee.

“Allowing a chance to delay enlistment is completely different from giving an exemption or arranging a special program,” Jeon said at the time. “We must offer the young men whose careers peak in their 20s an option to delay their military service.”

Kim Seok-jin, also known by his stage name Jin, is the eldest member of BTS. Born in 1992, he must join the military by the end of 2021 under the current Military Service Act.

The conservative opposition People Power Party (PPP) said it agrees with the intention, but has stressed that the process must be fair.

When Jeon proposed the revision bill to the Military Service Act, Rep. Ha Tae-keung of the PPP posted a message on his Facebook and demanded an objective standard for selection.

“Can an idol singer delay his enlistment if he is chosen by the culture minister?” Ha wrote. “Is this a dictatorship? The ruling and opposition parties must form a consultative body to create a fair standard.”

Meanwhile, a series of public petitions have been filed to the Blue House’s bulletin board to seek special arrangements for BTS members. Some proposed an exemption, while many others asked for a delay or an alternate program to best utilize the K-pop stars’ talents.

None of them, however, collected enough signatures as of Monday to warrant a reply from the government. Petitions with more than 200,000 signatures receive an official response.

[WHY] BTS and the war on Korea's military exemptions