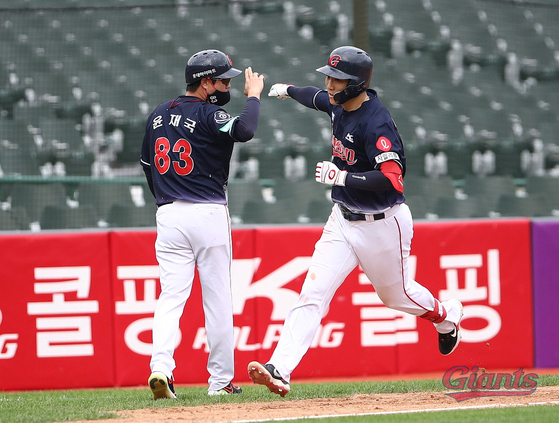 Lotte Giants infielder Oh Yoon-suk, right, celebrates after hitting a grand slam during a game against the Hanwha Eagles at Sajik Baseball Stadium in Busan on Sunday. [YONHAP]


With a four-game winning streak, the Lotte Giants continue to keep their slim chance of heading to the postseason alive.

Capping off the four-game winning streak, Giants' infielder Oh Yoon-suk made history on Sunday against the Hanwha Eagles, becoming the first person in the history of the KBO to hit for the cycle with a grand slam.

During the Giants’ game against the Hanwha Eagles at Sajik Baseball Stadium in Busan, Oh became only the 27th player to hit for the cycle in KBO history, adding in a grand slam for good measure. While there have been 26 other players in the KBO to hit for the cycle, Oh is believed to be the first person ever to do so in the same game as a grand slam.

Hitting for the cycle is when a batter hits a single, double, triple and a home run in the same game, considered one of the hardest feats in baseball. A grand slam is a home run hit with runners on every single base, giving the batter four RBIs in one swing of the bat. Doing both in one game is so rare that only nine players are believed to have managed the feat in the history of the MLB, and only one in Japan's NPB.

Getting assigned as the Giants’ leadoff and second baseman, Oh started off the game by hitting a double against Eagles’ starter Park Ju-hong. At the bottom of the second, with two outs and a runner on second, the 28-year-old added a single. Then, at the bottom of the third, with the Giants already holding a 5-1 lead, Oh hit a grand slam off of Eagles' pitcher Kim Jong-soo.

Finally, Oh completed the cycle with a triple at the bottom of the fifth.

Remarkably, Oh's grand slam was only the fourth home run of his career and his third this season.

Despite that big 14-5 victory on Sunday, the Giants still have some work to do. They are one game behind the sixth-ranked Kia Tigers and three games behind the fifth-ranked Doosan Bears.


Aside from the Giants, the Bears had a big weekend, switching spots with the Tigers. As the Bears swept their series against the Tigers, the Bears are now back to fifth.

But the Bears weren't the only team to switch spots in the regular season standing. Over the week, the KT Wiz moved up to second, complete unknown territory for the newest team in the league. They brought down the Heroes to get one game ahead and take second, but the chances of them catching up to the NC Dinos are slim as the Changwon club now has an eight-game lead.

Looking at the regular season standing this season, the new teams are making an upset. The top three teams in the KBO standing are the youngest teams in the league, with the Wiz joining the KBO last, in 2015.

The Wiz’s performance stands out this season as they’ve been considered one of the weaker teams in the KBO. Since joining the KBO in 2015, the Suwon club finished dead last for three seasons, ninth in 2018 and sixth last year.

The KBO will continue their regular season with all 10 clubs playing three-game series starting at 6:30 p.m on Tuesday.