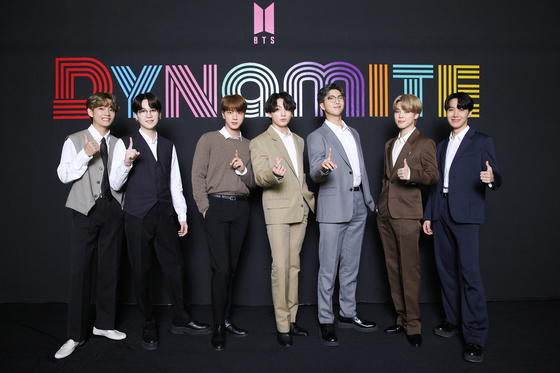 
BTS's latest single "Dynamite" is continuing its winning streak on the Billboard Hot 100 chart for the sixth week, ranking second on the chart’s latest update on Tuesday.

This week's Hot 100 was topped by hip-hop singer Travis Scott's "Franchise." Cardi B and Megan Thee Stallion's "WAP," which had been fighting over the top spot with BTS, fell to third place.

The Hot 100 is a weekly chart that ranks the most popular songs in the United States by taking into account streaming, music sales and radio airplay.

The song also broke its own record in radio songs chart by ranking 39th, a three-place increase from last week, which measures the airplay of songs across all musical genres throughout the United States.

According to Billboard, "Dynamite" was exposed to 23.1 million listeners on radio broadcasts in its sixth week of release from Sept. 28 to Oct. 4, up 11 percent from the previous week.

The number of downloads dropped 44 percent this week, but still hit a record of 86,000 downloads, topping the digital song sales chart for the sixth consecutive week.

According to Billboard, “Dynamite” recorded 13.7 million streams in the United States in its sixth week of the release from Sept. 28 to Oct. 4, down 2 percent from the previous week.