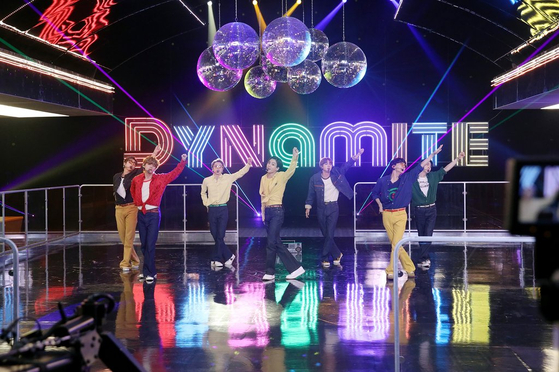 
BTS has, once again, made history with its hit single “Dynamite,” which reached No. 9 on Billboard’s Pop Songs radio chart, the highest for any Korean act.

According to Billboard on Tuesday, the song inched its way up from No. 11 to No. 9 in the latest update of the charts.

The Pop Songs chart is one of Billboard’s radio charts, and rankings are made by counting the number of times a song was played in the "Top 40" programs of approximately 160 radio stations.

BTS's previous high was with “Boy With Luv,” which landed at No. 22 on the Pop Songs chart last year.

“Dynamite’ entered the chart at No. 30, four days after its release.


Although the song fell out of the Top 10 in this week’s Hot 100 singles chart in Billboard, it was the longest time a BTS song remained within the top 10 — nine weeks in fact, topping the chart three times and ranking No. 2 four times.