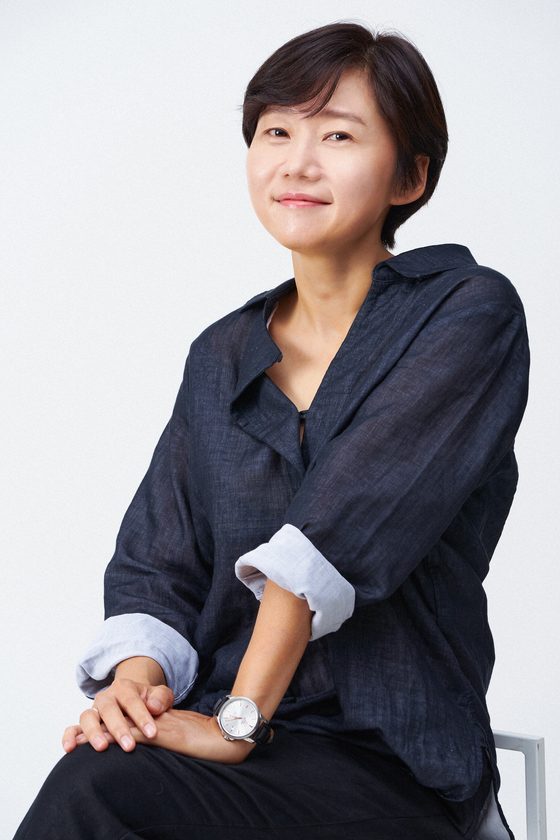 
Original series “The School Nurse Files,” starring actors Jung Yu-mi and Nam Joo-hyuk, shot onto Netflix’s Top 10 list after its release on Sept. 25 and remains in the No. 2 spot today.

Adapted from the novel “School Nurse Ahn Eun-young” by popular sci-fi and fantasy writer Chung Se-rang, the story — which is about an eccentric school nurse and exorcist Eun-young battling jelly-like substances that only she can see —already had a wide fandom.

Anticipation was high about how these “jellies” would be imagined on screen—and fans were curious to see how director Lee Kyoung-mi, who took the helm of the series, would portray the narrative of the original novel.

Lee, whose directorial debut came in 2008 through the feature film “Crush and Blush,” is known for her distinct narrative style which has been called both refreshing and bizarre. A consensus reached by audiences is that her style deviates far from conventional storytelling methods.

While she had some experience working with Netflix when she directed the “Love Set” episode of the four-part original series “Persona,” “The School Nurse Files” is her first official content on Netflix that's available to audiences in over 190 countries.

“It is a very new and exciting experience for me,” Lee said in an online press interview on Monday. “In films, the fate of the film lies on what kind of reviews it gets from the press screening—the reviews certainly impact box office sales a lot, so I would get nervous around that period—but it was very pleasant before the series was released on Netflix. There’s no process for it—the series is simultaneously released globally and the thought of meeting a diverse range of audiences [over the platform] was very exciting.”

Over the course of the interview, Lee talked about what message she wanted to portray to the global audience and how she infused the plot from the novel into the series. The following are edited excerpts.

I heard that you worked on the script together with Chung. How did you adapt the novel?
I received the novel and the script that Chung wrote, and as I read through them I reorganized the story’s structure to keep or emphasize parts that I liked. During that process Chung gave me a set of criteria on what she didn't want her story to become and for the rest she gave me freedom to portray it on screen.
I thought the main character had the potential to be turned into a heroine and decided to set the first season as a prequel of the story. I told Chung that despite the book’s overall bright and warm atmosphere, I also saw that it covers stories on life and death, and I wanted to focus on those.
After those two points were cleared, if Eun-young was to develop into a heroine, she needs ground for her own narrative—about her obstacles, hardships and struggles, and I redistributed the characters and episodes into a timeline. 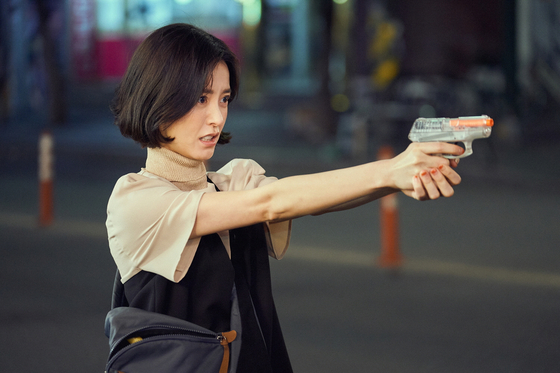 Eun-young holds out the BB Gun for protection. [NETFLIX]

Can you elaborate on the message you wanted to show through the series?
What I thought was important was the deliberation over the meaning of one’s existence. In the series, at one point Eun-young asks Hye-min [the transfer student] if there's ‘someone’ who created them, and in the sixth episode her narration starts with “Although there’s no one that made me.”
I think that’s one of the biggest differences from the novel, the fact that Eun-young struggles to find the significance in her existence [and her abilities]. Also in the book, what the characters feel or think is expressed in words, but if I were to visualize that, I couldn’t explain them all in narration or monologues, so I contemplated over how I could convey the atmosphere using colors, screen tone and CGI technology.
What I also felt while reading the book was that Eun-young is someone who’s in between two worlds—she lives in the real world but there’s also this other surreal world that only she can see. I thought of her mission as being similar to that of a lonely killer—she has to take care of the presence that’s only visible to her to protect the real world. I wanted to approach Eun-young as not a ready-made heroine, but as a person on a journey to get there by asking questions about her being, and focus on her choices to see how she ventures ahead.

Online responses say that you did a good job portraying the jellies. What part do you think the jellies play in the story and how did you materialize them?
Since these jellies are substances that Eun-young needs to fight, I wanted them to feel like opponents, but at the same time, I wanted them to be like the slime and jelly monsters that the media are familiar with from films, drama series and games.
Like Chung wrote, they were remnants of people’s desires and how they are manifested differently into [shapes, colors and sizes]. In the design process I wanted them to be creatures that bring about two opposite feelings when seeing them. [In one way] they are cute, but I also wanted them to feel gross. They may be soft and cute, but they are not an all-friendly presence. 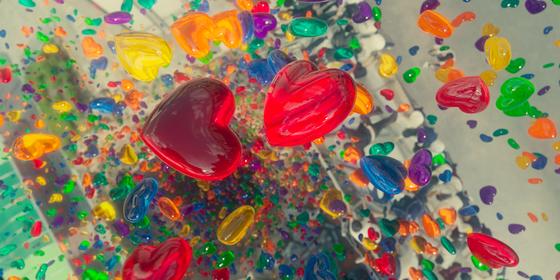 Jelly creatures are traces of human desires that can harm people. [NETFLIX]

You also added new opponents to the story centering around Hwa-su (played by actor Moon So-ri) and the organization Happiness, Safety and Protect (HSP).
I thought it would be difficult to carry out the series as seasonal content if Eun-young only fights jellies. If she were to become a heroine, I thought it would be more fun to have her stand against a powerful organization. Jellies might harm her physically, but the wounds that are inflicted by people are the ones that can really hurt her. And if that inflictor turns out to be her best friend, someone who she looks up to almost like a parental figure, Eun-young is left with a life-altering choice, and I believe that such decisions are made with a sacrifice. That part was to be played by Hwa-su, and how Eun-young breaks apart and steps forward from Hwa-su is the same as her overcoming her limits. 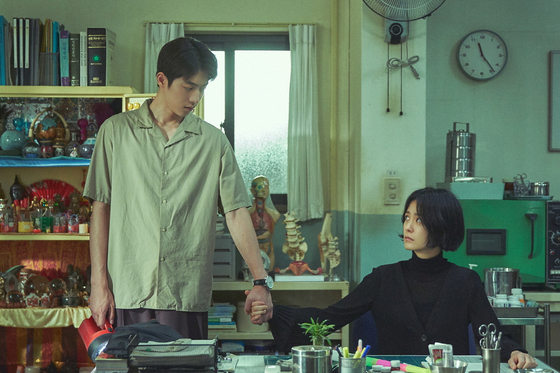 Actors Nam Joo-hyuk, left and Jung Yu-mi star as protagonists Hong In-pyo and Ahn Eun-young. In-pyo is a teacher who teaches Chinese characters and Eun-young is a school nurse and exorcist who protect the students from jelly creatures that she is only able to see. [NETFLIX]

More filmmakers are turning to Netflix now, and the expansion of streaming services is speeding up even more due to the Covid-19 pandemic. Do you think that one day, the cinema experience might disappear? And how was your experience working with the platform?
What I felt after working on this series was that films for cinema will not disappear because the experience offered by the big screen is so different from the one offered on streaming platforms viewed through smartphones, notebooks and iPads. I don’t think of it as a survival game where one outlives another. For instance, when you go into a theater and the door closes behind you, you have to—whether you like it or not—concentrate only on the screen in the total blackout and with big sounds. But with platforms like Netflix you can’t do that. Since people experience the content through multiple mediums there is a limit to the portrayal of sounds or the impact the total blackness offers at cinemas. When people see a dark scene [via platforms] they can also see their own face mirrored on the screen. I think the two will be separated and developed accordingly as their own kind of genres.
As for my experience working with Netflix—everything was a first for me. I’ve never done seasonal content, or used so much CGI technology, or worked on a script that is based on an original work. It was difficult, but one of the reasons I decided to take on this project was that the cultural trend is changing and if this is something that everyone has to go through, I thought it would be best to experience it as quickly as possible. All in all, it was hard, but I enjoyed it immensely.

Throughout the season, Eun-young keeps telling people—and also reiterates during her monologues—that you face your fate not because you were destined for it, but because you can’t avoid it. Her attitude is different than that of other heroes. I thought this was an interesting approach. Did you write this dialogue? If you did, what led you to characterize Eun-young this way?
That dialogue is particularly meaningful for me. I wrote that dialogue rather late, after I went through a personal tragedy. It was right before we started filming the series. Due to this incident I decided to quit this series—I just wasn’t able to continue with the project.
Most people say that if you can’t avoid it, enjoy it, but since then I came to the clear realization that there are things that you just have to cope with. That led me to write that dialogue—at the end of the sixth episode when Eun-young breaks down sobbing after she realizes that her powers were back. It's similar to how I felt as I decided to take on this project again. So that scene is also special to me.