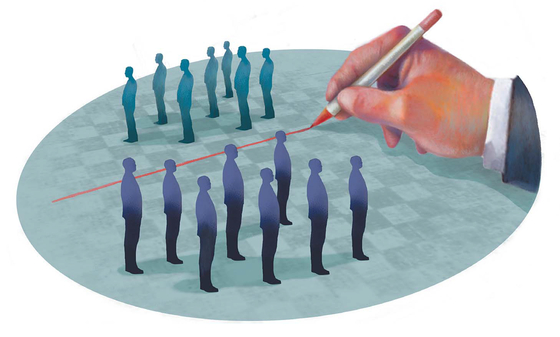 Humans are naturally inclined to form groups, share ideas and attempt to expand their consciousness. People often take sides, but the negative aspects cannot be ignored  — as seen in their tendency to accept and amplify only information they agree with.

Rallies in Gwanghwamun and Seocho-dong, criticism and support for Justice Minister Choo Mi-ae, descendants of Japanese collaborators and pro-Pyongyang factions show how sharply our society has been divided since the democratization group took power in 2017. The “Moon fanatics” and the “Taegukgi troops” see each other as targets to eradicate.

So we want to ask whether it is okay to ignore the interests of those who don’t belong to any side? Is the division an isolated phenomenon in Korea? Is forcing the people to take a side a sin?

‘Ruling party regards the opposition as an enemy, not a rival’ 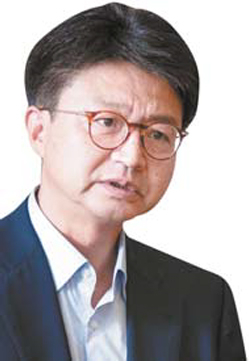 Kang Won-taek, Seoul National University’s professor of political science, used to be classified as a moderate liberal during the past rule of conservative governments. These days, he is considered to have conservative tendencies. Kang claims he has retained the same position, only making scholarly criticism of the ruling power.

When asked what worries him the most, he said, “It is the situation of stigmatizing and splitting the world into two.” We met him on Sept. 18. “In the inauguration speech, President Moon Jae-in emphasized unity, but now, society seems more divided than ever, worse than most Western democratic countries.”

Do you think discord has intensified?

Hostility among political rivals has never been so intense. The other side is viewed as an enemy, not an opponent. The term “eradication of old evils” seems to have a notion that “everything before we came to power is evil.” I was very surprised that Democratic Party lawmaker Hong Young-pyo, who served as a floor leader, called the opposition party “the coup force.”

How about the views that things were just as intense during the Lee Myung-bak and Park Geun-hye administrations?

In the past, there was a group who helped prevent a ruling party’s leaning to one side. If discords became serious, the president tried to resolve it. Now, the president is taking an axe to the factional rhetoric. In the conservative government, discord was intense over the state-authored textbooks, but they were ideological and policy-centered controversies. In the current administration, however, the sides are divided not over ideology and policy but personal relations among former activist groups. Problems with “my side” are not viewed as a matter of fairness or value but a political intention to weaken their foundation. In the Lee Myung-bak administration, Lee Sang-deuk, president’s brother and a lawmaker, was imprisoned, and sons of the presidents went to prison during the Kim Young-sam and Kim Dae-jung administrations. It is hard to expect that from this government.

Professor Kang said that the current administration’s “own side” is “very closed structure” and “narrow.” He also used the expression, “You must wear a decoration to be promoted.” He was referring to the Moon administration’s hiring of people from the Roh Moo-hyun administration, the People’s Solidarity for Participatory Democracy and the Lawyers for a Democratic Society.

Are you saying the ruling power is largely responsible for taking sides?

They divide things into good and evil, or enemy and ally. Is it their nature or strategy?

I think it’s both. It seems to be related to the activist experiences in the 1980s. They needed moral justification to stand against oppressive power. It is activist rhetoric. They should view the opposition as an opponent in established politics, but it seems to be not working. In a way, they seem to think that’s not a disadvantage for them. They keep [arguing] so that they are on the majority, like pro-Japanese, doctors and nurses, those who own houses and those who don’t. That is a populist approach.

I am reminded of a ruling party member saying, “40 percent of the citizens are on Cho Kuk’s side.

He was saying the united 40 percent is more important than the divided 60 percent. As the opposition cannot appeal to that 60 percent, it’s enough to have the 40 percent. Such an attitude comes from their dismissal of the opposition. But this view can lead to arrogance.

Will the current phenomenon ease after this administration?

I desperately hope so. It will be better somewhat. It doesn’t seem easy for a former democracy activist group to maintain power with such thinking. President Moon is the central figure uniting them, but it’s not easy for a successor to serve in that role. 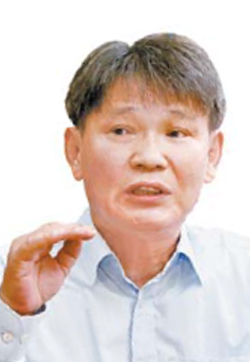 Kim Ho-ki, a Yonsei University professor of sociology, was cautious. He frequently said, “I have to look up the data” to answer questions. It is only natural for a social scientist to try to avoid impressionistic criticism.

At the same time, he may find it awkward to criticize the current Korean society in the Moon Jae-in administration as a liberal scholar. Nevertheless, he said that polarization in Korean society was on the extreme side, and he has “doubts over whether the former democracy activist group really has the ability to produce results.”

Is taking sides in Korean society that serious?

Taking a side means social discord. Korea has serious ideological, class and gender discords [compared with other] OECD countries. Generational conflict took place as the issue of how to view the so-called 586 generation emerged in the years.

Is it related to the Moon administration?

Well, I have to look up the data. What’s clear is that the conflict intensified after the Roh Moo-hyun administration. In the Roh administration, the democratization forces finally took power on their own. As the liberals attempt to govern in their own way, conservatives grew increasingly alienated.

The current administration has been given the task of rooting out what it calls “past evils.” The calls to uproot an ancient regime during the candlelight protests helped intensify ideological and political confrontations.

Don’t the 586 elites in the current administration amplify discord?

Some certainly look at Korean politics in the dichotomy of ally versus enemy, and democratic group and anti-democratic group. The reality is far more complicated. In many cases, there are many answers beyond good and evil, and the best possible answer needs to be chosen. As Max Weber said, the 586 elites have the ethical conviction of what’s right and wrong but relatively lack ethics of accountability to take responsibility for outcomes.

They have tried to monopolize justice in history and real estate.

“The 586 group made considerable contributions to attain procedural democracy. But reconsideration is needed on actual democratization. Questions of the capabilities of the 586 grew among people. The Moon administration successfully implemented Covid-19 disease control, but re-evaluation will be made on its income-led growth. The latest real estate policy weakened public trust in the government.

So are you saying they are incompetent?

What the moderates want is policy outcomes, not clear ideology. The minimum wage was increased by nearly 30 percent in the first two years, (16.4 percent in 2918 and 10.9 percent in 2019) yet the margin of increase was drastically reduced (2.87 percent in 2020 and 1.5 percent in 2021). Long-term perspective was lacking.

The prospects were not so bright, not only for the Moon administration but also for overall politics in Korea.

Why is the middle ground disappearing?

Georgetown Professor Jason Brennan categorized voters into passive “Hobbits,” active “Hooligans” and reasonable “Vulcans” in his book “Against Democracy.” Hooligans dominate American politics, and it is a global phenomenon. They are fanatics, in other words.

What should we do?

Extremism and moderatism alternates like a pendulum. Extremist voices are loud, but they are approaching the limit. I think the next government will advocate unity as a goal no matter who takes the power. You cannot leave the country in this state. A candidate who can make one Korea out of conservative Korea and liberal Korea will get support. But there is no way of knowing the future.

Cooperation is a two-way street

Joining Biden’s IPEF is a no-brainer