Park Yong-taik's 2,500-hit record is likely to last for a while

Park Yong-taik's 2,500-hit record is likely to last for a while 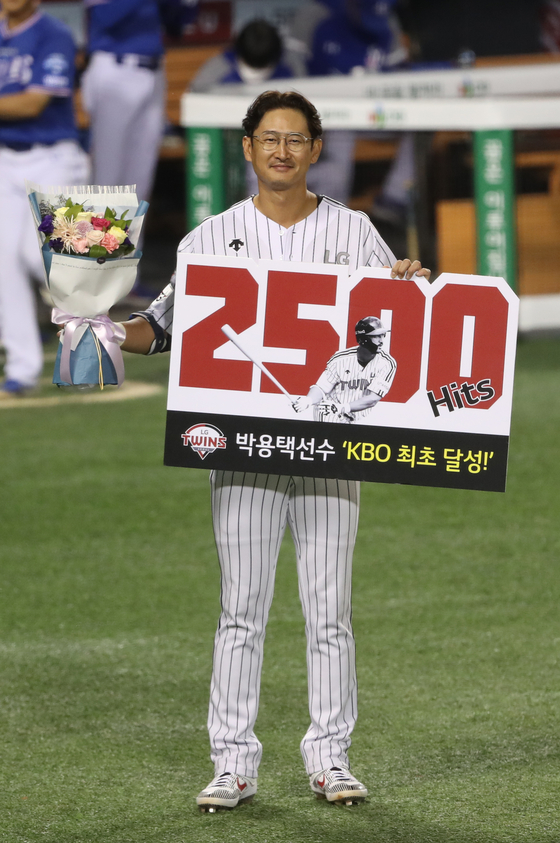 
LG Twins veteran Park Yong-taik picked up his 2,500th career hit on Tuesday, becoming the first player in the history of the KBO to reach the milestone.

Park appeared in the batting box as a pinch hitter at the bottom of the ninth inning with the Twins already down 3-2 against the Samsung Lions at Jamsil Baseball Stadium in southern Seoul. With one out and a runner on base, Park hit a clutch double into right field to set the new record and put runners on second and third.

Unfortunately for Park, the Twins weren't able to convert either of those runners, and the game ended 3-2 to the Lions. The loss pushed the Twins down to fifth place, the wildcard spot, with just a few weeks left of the regular season.

Following Park, the only other active player to make the top 10 list is Kim Tae-kyun with 2,209 hits as of 6 p.m. on Wednesday. As Kim is currently 38 and every other player in the top 10 has already retired, it may be some time before any KBO player gets close to Park’s record.

This season, Park has appeared in 83 games and has a 0.302 batting average with 34 RBIs, two home runs and 61 hits this season. Park normally appears as pinch hitter or designated hitter.

Park also came one step closer to setting another record on Tuesday. With 2,222 career appearances, Park is one game away from tying the KBO’s career games record set by Jung Sung-hoon, now a coach with the Kia Tigers. As the season isn’t ending for a few more weeks, Park is expected to break that record.

Park, the oldest player in the KBO, is due to retire at the end of this season. After 19 years with the Twins, his goal for the season was to win the Korean Series for the first time. With just 17 games left and trailing in fifth place, the Twins face an uphill battle and likely a serious postseason fight to be in with a shot at the championship title.