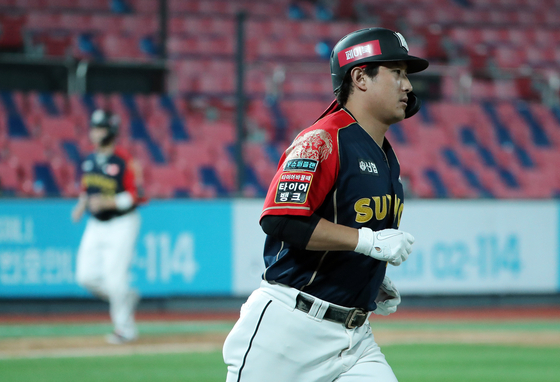 Hwang Jae-gyun of the KT Wiz rounds the bases after hitting a three-run home run during a game against the LG Twins at KT Wiz Park in Suwon on Oct. 3. [NEWS1]


There’s no doubt that the KT Wiz had a fantastic September.

Throughout the month, the young team topped the league in monthly winning percentage, at 0.371, allowing them to move up to second in the regular season standing as of 6 p.m. on Wednesday.

Behind the Wiz’s success, third baseman Hwang Jae-gyun played a significant role, as he had a 0.382 batting average with five home runs, 22 RBIs and 25 runs throughout 26 games in September. During this time, he topped the league’s monthly ranking in runs and was ranked third in batting average.

Playing his third season with the Wiz, Hwang is finally proving that his 8.8 billion won 4-year free agent contract was worth it.

Back on Sept. 12, while the Wiz were on the verge of a three-game winning streak, Hwang added a run to allow the Wiz to take the lead. During a game against the Doosan Bears on Sept. 17, Hwang added two RBIs to help the team pick up a 3-0 victory. On Sept. 17, during a game against the SK Wyverns, he hit the winner to lead the Wiz to a four-game winning streak.

With runners in scoring position, Hwang has a batting average of 0.409. With the Wiz’s outfielder Mel Rojas Jr. also having a dominant season, Hwang’s strong performance in September has allowed the young team to jump up to the second spot on the leaderboard.

Below are edited excerpts of an interview with Hwang.


Q. Throughout the month of September, you hit four winners. Your ability in clutch situations stood out. What changed?


A. It’s not like my mindset changed based on who’s on base. Back when I wasn’t batting well, I didn’t have the ability to be the team’s problem solver even when we had runners on bases. After July, it got better and other batters gave me more opportunities to add RBIs.


Q. Looking at your stats in the month of September, there was only one game where you didn't get a hit. That’s quite a record. How do you feel?

A. It’s a meaningful record. Anybody can get into a slump. It’s important to minimize that time. You have to maintain consistency to help the team more.


Q. Your batting average in September and so far this month is pretty high. It seems like your performance gets better toward the second half of the season. How so?

A. Back in 2015, I struggled in the second half of the season. Due to that, for the next season, I focused more on keeping my pace and conditioning. I guess my hard work may have paid off a little. But I don’t really think about the stats.


Q. In 115 games this season you’ve had 143 hits. You’re about to have a new career high in the number of hits this season. How do you feel?

A. In terms of hits, I set my goal as 150 every season. In 2019, I challenged myself to make 150 hits or more for five straight seasons but I failed due to an injury. I don’t really think about my career high in hits. I just want to continue the 150 hits or more streak for consecutive seasons. That’s the way to help the team.


Q. Not only in hits, but you’re close to hitting 20 home runs or more for five straight seasons. Are you aware of that at all?

A. It’ll be nice if I can accomplish it, but I’m not thinking about it much. I only have one goal for myself — to add 100 runs or more in a single season. Since I’m the second batter in the lineup, I have to get on-base and extra bases as much as possible. To help KT finish second in the season, I want to add more runs.


Q. What is the secret behind keeping your batting strong and consistent this season?

A. I'm always looking after myself. After every at bat, I ask coach Kim Kang and Cho Joong-keun about the timing of my batting or the swing form, as they watch from the dugout. Thanks to the two coaches who take a close look at my batting, I think I’m able to stay strong.


Q. If you had to pick one, what have you improved on since joining KT?

A. Until the 2016 season, when I played for the Lotte [Giants], I wasn’t considered a veteran [within the team]. But with KT, I’m playing the role of leading the younger players. The team’s performance and improvement in our playing has gotten more important than my personal stats.


Q. What have you learned from captain Yoo Han-joon and vice-captain Park Kyung-su?

A. I learn everything. The two veterans have a very different style. So I’m seeing different types of leadership. I think I’m able to find the right way based on the situation.


Q. When you signed your free agent contract at 8.8 billion won [$7.6 million], a lot of the fans said it was too high. How did you feel about that?

A. At first, I felt some pressure. But it was more important for me to blend into the team, to become the player that the team needs. I think I’m slowly moving toward that goal.


Q. This is probably the season where you can be recognized as one of the KBO’s best third basemen. Are you nervous about the evaluation after the season?

A. I am curious as to how I’ll get evaluated on one season. But it’s more important to become a better player — to become a player who can help [the team] without getting injured and playing in all the games. Rather than being exceptional at one thing, I want to be good at defense, offense and base-stealing and get recognized as all-around player.