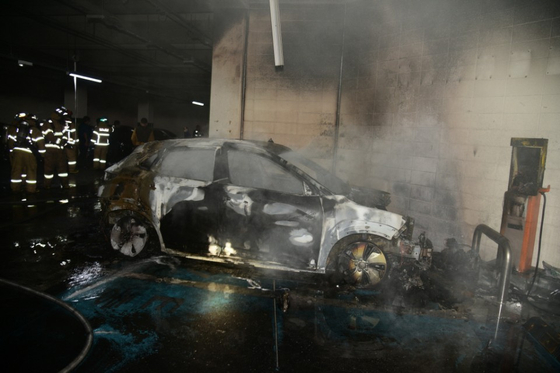 A Hyundai Motor Kona electric vehicle is burnt out in a parking lot at an apartment complex in Daegu on Oct. 8. [YONHAP]


Hyundai Motor has decided to voluntarily recall its fire-prone Kona electric vehicles (EVs), according to the Ministry of Land, Infrastructure and Transport.

According to the ministry on Thursday, the automaker has decided to recall 25,564 Kona Electric cars manufactured between 2017 and 2020.

Hyundai Motor suspects that an issue with the batteries is to blame for a string of fires, especially damages to the separator.

The automaker plans to look into any anomalies in the batteries after updating its battery management system and immediately replace them if there are any signs of damage, including significant changes to the battery temperature.

The recall announcement was made after Hyundai Motor apologized for its EVs catching on fire on Tuesday.

“We deeply apologize for the fires that broke out in several Kona EVs recently and the concerns this caused to our customers,” the company said through a statement.

Since the first incident occurred at the automaker’s Ulsan plant on May 19, 2018, there have been 12 separate incidents of Kona EVs bursting into flames, two of which happened overseas — in Canada and Austria.

The latest fire occurred on Sunday when a car burst into flames while it was being charged at a parking lot of an apartment in Daegu.

While no one was hurt, the vehicle was burnt to a crisp.

LG Chem, which supplies the battery for Hyundai Motor EVs, strongly protested against the blame being put on its product.

In a statement released Thursday, LG Chem said the recall announcement was made without investigation results that pinpoint the fault that is causing the EV to catch fire.

The company argued that a joint test with Hyundai Motor did not lead to a fire, and therefore the battery may not be the problem.

LG Chem, however, said it will actively participate with Hyundai Motor in investigating the cause.

The Kona is the second best-selling EV in Korea after Tesla’s Model 3.