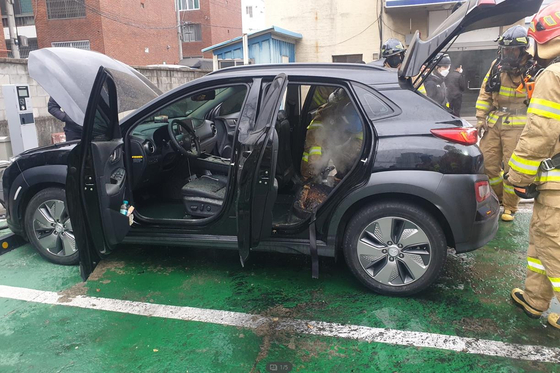 Hyundai Motor will replace LG batteries in more than 80,000 electric vehicles (EVs) including the Kona Electric, because of fire risks.


The recall is expected to cost Hyundai Motor and LG Energy Solution approximately 1 trillion won ($917.1 million). How the two companies will share the expense is still under negotiation.

Hyundai Motor said the cost will be reflected in its 2020 fourth quarter results.

The Transport Ministry announced Wednesday that Hyundai Motor will recall three EV models – the Kona Electric, Ioniq Electric and Elec City bus – by replacing what's called the battery system assembly (BSA), which is the entire battery pack and components related to it, including the software and cooling system.

The ministry said that some LG Energy Solution batteries manufactured at its Nanjing factory between Sept. 2017 and July 2019 were found to have defect in cells that could lead to fires.

The announcement comes four months after Hyundai Motor announced its first recall of Kona Electrics after more than dozen were reported to have caught fire in and outside of Korea. The recall affected 77,000 units globally.

The vehicle's safety was called into question again when a recalled model caught fire last month in Daegu.

“The latest recall is a follow-up measure to an incident in which a recalled Kona Electric caught fire in Daegu in January 2021 after its software was updated,” the ministry said in a statement Wednesday.

“The recall affects all vehicles that are equipped with high voltage batteries manufactured in Nanjing, China between Sept. 2017 and July 2019.”


The ministry said that an investigation by the state-run Korea Automobile Testing & Research (Katri) that is not finished yet reported that a misalignment in LG's battery cells had been found, which could cause a fire due to an internal short-circuit. No case of actual fire occurred, however, in experiments, the ministry said.

The ministry also said that Hyundai Motor did not install the proper rapid charging software in the Kona Electric BMS when updating the system in March 2020. The ministry will look into whether this could lead to fires.

Ensuring consumer protection and resolving anxiety related to fires prior to launching dedicated EV models was the main reason for the recall, Hyundai Motor explained in an investor relations event held Wednesday.

On Tuesday, Hyundai Motor premiered the Ioniq 5, the first model by the company's EV-dedicated brand, Ioniq.

LG Energy Solution said it will cooperate with the Transport Ministry and Hyundai Motor in the recall.

"The misalignment of the battery cell that is mentioned as the cause of the recall cannot be seen to have a direct relation with the fire because no fires occurred during the recreated experiments," the company said in a statement.

"This issue occurred in the initial stage of mass production at our Nanjing line dedicated to the Hyundai Motor lineup and has already been fixed."