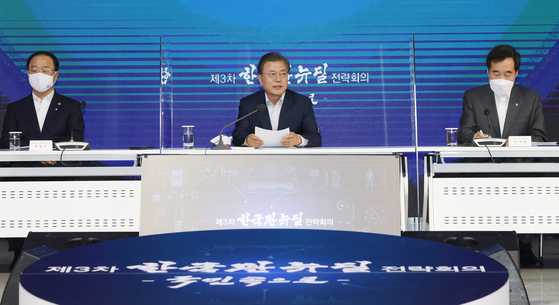 
President Moon Jae-in stressed that there are no other options but his so-called Korean New Deal.

“Since announcing the first concept [in April], the Korean New Deal has evolved,” Moon said during a Korean New Deal ceremony held at the Dongdaemun Design Plaza (DDP) in central Seoul on Monday.

“Following the Digital New Deal, which would create a major transition towards a digital society, the Green New Deal, converting into a low-carbon economy, has begun.”

Moon stressed that in the last six months the government has aggressively worked in coming up with detailed plans for the Korean New Deal including a 160-trillion-won ($144.5 billion) investment plan as well as naming 10 leading projects.

“Now we are at a stage beyond concept and entering the stage of realization,” Moon said. “Our [Democratic] party is in the center of the Korean New Deal’s evolution and development.

“The leaders [of the party] including party leader Lee Nak-yon should lead [in the Korean New Deal].”

Moon said the global coronavirus pandemic has increased the need for major changes.

“The digital and green revolutions are a major transformation of civilization that transcends ideology and partisanship,” Moon said. “They cannot be avoided and there are no other options.
“A quick transition to a digital and low-carbon society and economy is the road to survival and development and a strategy headed toward the future.”

Party leader Lee, who was the first Prime Minister of the current administration, has promised full cooperation including legislative backup to foster new industries and improve regulations.

“For whatever reasons, the opposition party seems to have its goal set on cutting back New Deal budgets,” Lee said. “The more [New Deal] budgets are cut, the foundation that would help our economy leap after Covid-19 will likely be weakened.”

Lawmakers are currently evaluating next year’s budget, which the government has proposed at a record 555 trillion won, 44 trillion won or 8.5 percent more than this year’s.

The former Prime Minister said the first thing it would do to support the government’s effort is to emphasize public participation in the Korean New Deal, which will be a key factor to its success.

“To the public, the transition towards digital and a low-carbon [economy] may seem remote from their lives,” Lee said. “But they will actually feel the ‘human’ New Deal and the ‘regional balance’ New Deal, which are pillars of the Korean New Deal and directly connected with their lives.”

This was the third New Deal meeting hosted by Moon. The first in September was focused on financial investments while the second focused on regional cooperation and balanced development.