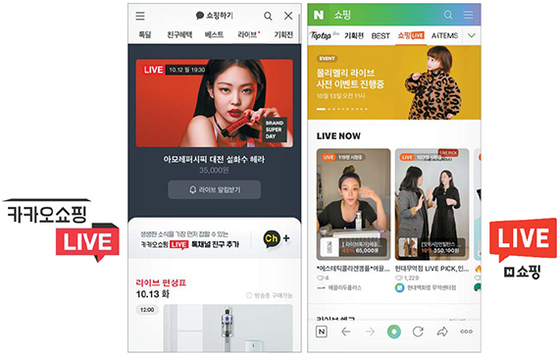 
With online shopping booming in Korea, IT companies are scrambling to launch their own live commerce services as they look for new ways to attract more customers.

Live Commerce is similar to TV home shopping in that a host promotes products on a media channel. But it’s broadcast live online, allowing viewers to freely communicate with the host by sending messages through the platform.

IT companies see live commerce as a major opportunity to connect with customers. The boom is largely led by customers in their 20s and 30s who are comfortable with mobile phones and videos and whose shopping patterns perfectly fit the concept of live commerce.

According to eBEST Investment & Securities, trade volume through live commerce totaled about 3 trillion won ($2.61 billion) this year, and is expected to rise to 8 trillion won by 2023.

Among big IT companies in Korea, Naver was the first mover.

In March, Naver launched its own live commerce service Selective. The company changed its name to Shopping Live in July and has been expanding the service. Snow, a Naver subsidiary that runs a video messaging app, recently took over video streaming app Jam Live to expand its live commerce service.

“We will strengthen [our live commerce service] so that more people can see it in the main and search page of the Naver portal,” said Naver CEO Han Seong-sook during a conference call.

Naver’s Shopping Live allows sellers to easily create their own content: All the sellers need in order to prepare a broadcast is a smartphone. As Naver collects very low commission fees from sellers — 3 percent of total sales — its live commerce service is gaining popularity from people who run businesses on Smart Store, a shopping platform under Naver.


Kakao is rapidly catching up.

Kakao Shopping Live is very similar to the mobile version of a home shopping channel. The platform provides sellers the necessary tools and techniques to create and produce content even for those who have no experience.

The biggest advantage of Kakao Shopping Live is that it has roughly 50 million KakaoTalk users as potential customers. Ahead of live broadcasts, sellers can send notifications to KakaoTalk users explaining schedules and information about the products. They can also communicate with the customers directly through the messenger app.

Since May, when Kakao started its beta service, it ran a total of 43 live commerce broadcasts, accumulating 8.8 million views in total.

Currently, Kakao Shopping Live’s KakaoTalk channel had around 1.25 million subscribers. On Sept. 9, Samsung Electronics sold its Galaxy Buds Live Fila Edition through Kakao Shopping Live and a total of 1,500 sets worth around 300 million won sold out in less than 50 minutes.

“IT companies are in a stronger position than other retailers as they are able to offer the most suitable content for mobiles, as well as payment methods based on their existing infrastructure,” said Oh Rin-a, an analyst at eBEST Investment & Securities.

“As live commerce delivers real-time communication, it’s really hard to find evidence of them using false or exaggerated advertising,” lawmaker Yang Jung-suk said during a parliamentary audit hearing at the National Assembly on Oct. 8. “As the concept of ‘live commerce’ is so ambiguous, there are no laws or rules to regulate it.”