Newly-launched web drama series “My Fuxxxxx Romance” can be seen as Korea’s very first “Mamma Mia” — not because its ABBA-obsessed, but because it’s the first drama series to be produced based on a singer’s album.

Singer-songwriter Park Won will release the first part of his third full-length album “My Fuxxxxx Romance” on Oct. 22, marking his first new music in two years. Ahead of the release, a web drama series of the same title began airing on Oct. 11 through Naver TV with new episodes released every Thursday and Sunday at 7 p.m. until the sixth and last episode on Oct. 29. Actors Kim Yi-kyeong, Oh Dong-min and Kim Seung-ho take on the lead roles, as well as Hana of girl group Gugudan.

According to Playlist, the web drama production company, the drama series was created around the tracks of the upcoming album and will contain the concept and ideas of Park’s music. Contrary to how original soundtracks are made — after the plot of a film or drama is set — the novelty of this new collaboration is the first of its kind not only for web dramas, but also for all forms of video content in Korea. Not much has been revealed about the new album, but a cynical and heartbreaking theme can be anticipated after watching the first trailer video revealed last week.

Park is seen alone, writing something down on a piece of paper in a dimly lit studio. The only lyrics we hear are “It’s not as beautiful as I thought, my fuxxxxx romance,” which is the “story that penetrates the whole album,” according to Park’s agency Makeus Entertainment. 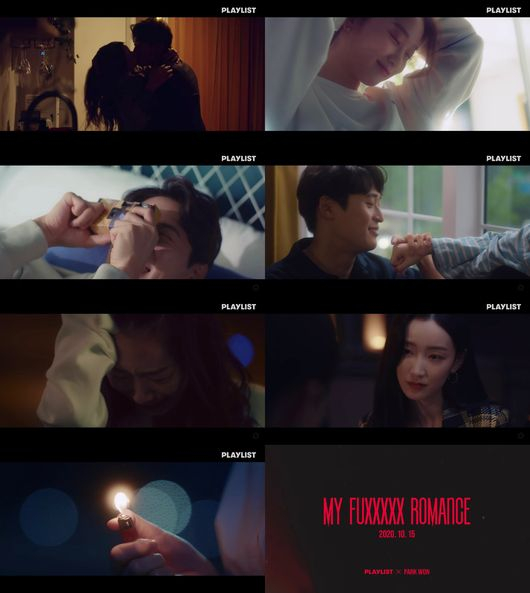 Still images from the web drama series "My Fuxxxxx Romance" based on the album of the same title by singer Park Won. [PLAYLIST]


The trailer of the drama also takes on a cynical tone, with the phrase “It is love that sucks, or me?” with a rock-style guitar tune playing in the background, building a tense mood rather than a melodramatic one.

Viewers were shocked by the first R-rated episode which introduced the lead female character, a young woman looking for one-night stands online, a subject rarely explored in web dramas which are usually dominated by teenage love stories due to the younger audience demographics.

“Park Won chose the form of a web drama series to express the different form of love and emotion that people feel, in the beginning stage of his album development,” his agency said while urging people to watch the series to learn the true intention behind his album.

Web dramas have proven successful during the last couple of years, with some popular series such as “Ateen” (2018) and “Love Playlist” (2017), both produced by Playlist, garnering millions of views on Naver TV and YouTube. Its short running time of no more than 20 minutes and subjects that are popular among the younger generation attracted female viewers, especially in their teens and early 20s. More and more content providers are venturing onto the scene, even television broadcasters such as KBS, MBC and SBS.

“Considering how dramas are made first and then original soundtracks come later, ‘My Fuxxxxx Romance’ is the first project where the soundtrack and drama were made simultaneously and is expected to bring great synergy between the two,” Makeus Entertainment said.