Three neckties donated by President Moon Jae-in to the JoongAng Ilbo's WeAJa charity flea market this year. The ties will be auctioned as a part of the annual charity event in the coming weeks. [WESTART]

“I loved wearing them for the past six or seven years,” Moon said in a message attached to the neckties. “I started using them when I was a lawmaker. They stayed with me when I was the [Democratic Party] chairman, presidential candidate and now.”

The president’s neckties will be auctioned at the JoongAng Ilbo’s WeAJa Charity Flea Market. The annual event, now in its 16th year, will be held as an online, no-contact event in light of the ongoing pandemic. Online auctions of celebrity-donated items, including Moon’s ties, are scheduled to take place in the coming weeks.

“The three ties are personal favorites of Moon,” a presidential aide told the JoongAng Ilbo. “Since October 2016, Shin Jee-yeon, the current first personal secretary to the president, worked on an initiative to create Moon’s personal identity. She made blue neckties a trademark item of Moon. They are not expensive ones, but they are ties of great designs and quality, produced by Korean companies.”

Since he took office in 2017, Moon has repeatedly donated neckties to the annual charity event.

In 2017, he donated a necktie bearing the pattern of Gangchi, a kind of fish that once lived near Dokdo but went extinct due to Japan’s overfishing. The tie was designed by a Korean company in 2012 to mark the 112th anniversary of Dokdo Day.

Moon had worn the “Gangchi” necktie when he had a luncheon meeting with party leaders at the Blue House, and a press conference to name a new Constitutional Court justice. The tie was sold for 300,000 won ($261) in the 2017 auction.

In 2018, Moon donated a necktie he wore on a trip to the Vatican. It was worn by the president during his meeting with Pope Francis at the Apostolic Palace on Oct. 18, 2018 and when he attended a special mass for peace on the Korean Peninsula at St. Peter's Basilica in the Vatican. 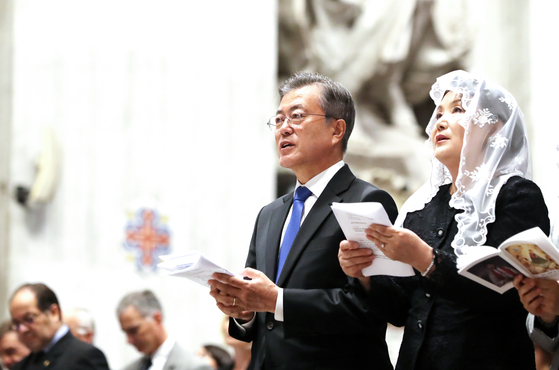 In this file photo, President Moon Jae-in and his wife Kim Jung-sook sing during a special mass for the Korean Peninsula's peace at the St. Peter's Basilica in the Vatican on Oct. 18, 2018. Moon later donated the tie to the 2018 WeAJa charity market. [YONHAP]


The necktie was sold at a price of 3.4 million won at the charity auction later that year.

“Moon has paid special attention to the WeAJa Charity Flea Market for its support of children from low-income families,” a presidential aide said. “Because this year’s event is intended to support children from households suffering hardships in the aftermath of the Covid-19 outbreaks, Moon showed particularly high attention.”

Other politicians also made donations. National Assembly Speaker Park Byeong-seug donated an artwork that he had owned for more than 30 years.

Auction schedules for goods donated by the celebrities, sports stars and politicians are available on the homepage of the event, weaja.joins.com.

The JoongAng Ilbo started the WeAJa Charity Flea Market in 2005 to mark the media group’s 40th anniversary. From 2005 through 2019, nearly 21 billion won has been raised and spent helping children from low-income households. This year’s funds will be spent to support children from families suffering in the aftermath of the pandemic.