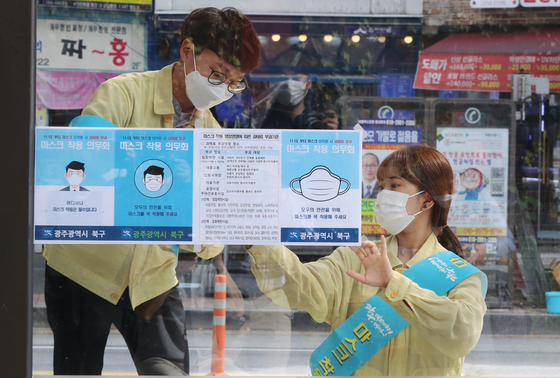 Anyone using public transit, participating in a protest or visiting a medical center or a care facility for older people has to wear a face mask — or face penalties.

Under the law, people are allowed to wear so-called dental masks, surgical masks, hygienic masks, disposable masks and cloth masks, but scarves pulled across one's face or masks made out of net fabric can face penalties.

Children under the age 14 and people with disabilities who may have difficulty wearing masks won’t face penalties, or people who briefly take off their masks while eating, washing, swimming, performing a medical procedure, taking a photo or holding some sort of an entertainment show, health officials said.

For months, mask wearing has been required by several local government offices and strongly recommended by central health authorities — and mostly followed on public transit and other crowded places — but there were no penalties on a national level.

The face-mask law went into effect as health authorities said Tuesday the nation added 102 new cases of the coronavirus Monday, up from 98 the day before. Among Monday’s total cases, 69 were domestic infections, while the rest were imported cases.

Asked by reporters Tuesday whether the uptick had to do with eased social distancing measures, Yoon Tae-ho, an official at the Central Disaster Management Headquarters, blamed imported cases for the rise. 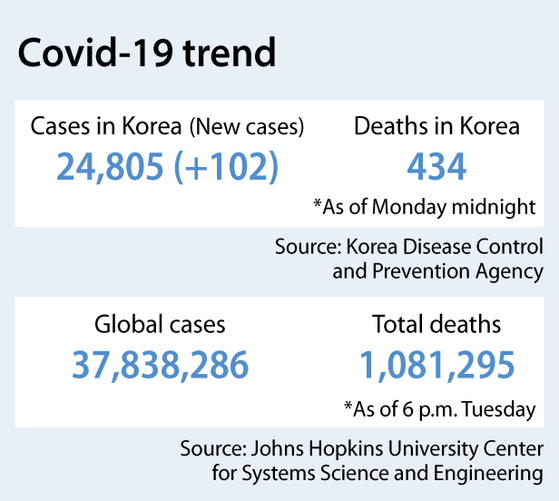 “We’re monitoring the imported cases closely,” said Yoon, adding that health authorities were currently discussing whether to take additional preventive measures against people flying in from certain countries where the coronavirus is spreading.

“We’ve concluded that infections over the Chuseok holidays have now come to a lull, but clusters that emerged last week are still spreading,” he continued.

Among Monday’s domestic infections, 32 were in Gyeonggi, 18 in Seoul, nine in Daejeon, four in Gangwon, two in South Chungcheong and one each in Busan, Gwangju, North Chungcheong and North Jeolla, according to data from the Korea Disease Control and Prevention Agency (KDCA).

Out of the imported cases, 14 were from Russia, five from Japan, four each from the United States and Nepal and one each from Uzbekistan, the Philippines, Bangladesh, Ukraine, Canada and Brazil.

One person died Monday, bringing total deaths to 434, while 135 patients recovered, raising total recoveries to 22,863. As of Monday at midnight, Korea had counted 24,805 coronavirus patients in all.

Most cases imported from Russia were connected to vessels that docked at Busan Port over the past couple of days. Busan officials said Tuesday there were 16 sailors from those ships who recently tested positive for the coronavirus after apparently spreading the disease to their fellow seamen.

A cluster that emerged earlier this month at a hospital in Uijeongbu, Gyeonggi, has risen to 60 related cases, while another cluster at a hospital in Dobong District, northern Seoul, has reached 64 cases, 58 of whom are patients who were hospitalized there, and six who are medical staff who work there.

Amid worries that the upcoming flu season could lead to a “double pandemic,” Jeong Eun-kyeong, commissioner of the KDCA, urged the public Tuesday to wear their face masks and wash their hands frequently, saying getting a vaccine alone can’t entirely block people from getting influenza.

The government’s free flu shot program resumed Tuesday after it had abruptly halted on Sept. 22 when authorities noticed faulty procedures in deliveries. Some vaccines were left at room temperature as they were being shipped instead of being refrigerated.

After an investigation, the KDCA announced last week that “no safety problems” were found in the vaccines.