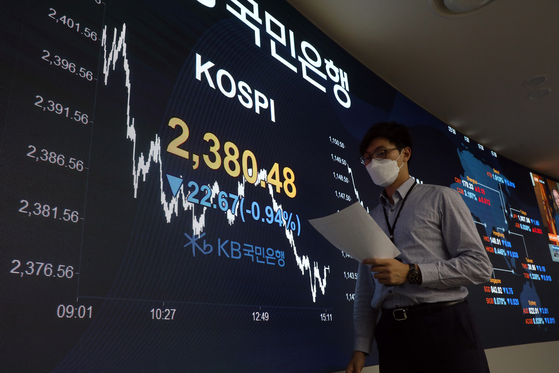 A screen shows the final figure for the Kospi in a dealing room at KB Kookmin Bank in the financial district of Yeouido, western Seoul, on Wednesday. [NEWS 1]

Trading volume was moderate at about 880 million shares worth some 10.5 trillion won ($9.2 billion), with losers outnumbering gainers 638 to 227.

The Kospi was down for a second consecutive session, widening losses toward the session's close.

Investor sentiment worsened amid concerns that a new cluster infection in the southeastern port city of Busan could lead to a mass outbreak.

"News reports about the large-scale infections in Busan seem to have accelerated the sell-offs [of local stocks]," Kiwoom Securities analyst Seo Sang-young said.

Losses also deepened over worries that the new U.S. stimulus plan is losing steam ahead of the November presidential election.

Earlier in the day, the Bank of Korea (BOK) froze its key interest rate at a record low of 0.5 percent as widely expected. An export slump and Covid-19 flare-ups have somewhat eased, but consumption has slowed due to the protracted pandemic, the BOK noted.

The local currency closed at 1,146.9 won per dollar, down 0.2 won from the previous session's close.