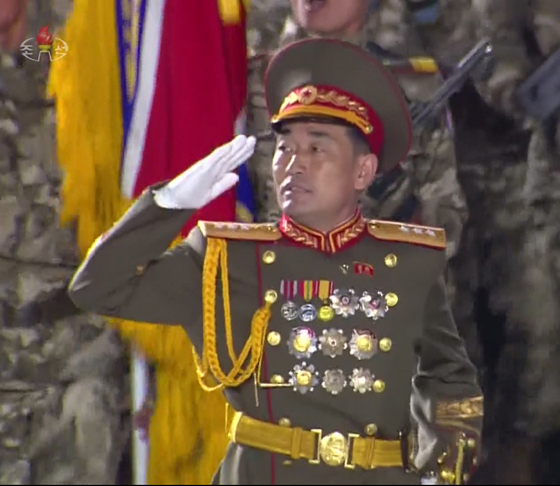 Gen. Kim Jong-gil, North Korea's new head of the Strategic Force, marching with troops in a military parade on Saturday as seen in footage from the official Korean Central Television. [YONHAP]

Kim Jong-gil, a three-star general, was introduced by the North’s official state broadcaster Korean Central Television (KCTV) as commander of the Korean People’s Army Strategic Force, a post that had been held by four-star general Kim Rak-gyom since 2012.

The new commander was seen marching at the helm of a unit of the Strategic Force in KCTV’s footage of Saturday’s military parade in Pyongyang, in which the regime unveiled a host of new strategic weapons, including an augmented intercontinental ballistic missile (ICBM) and a new submarine-launched ballistic missile (SLBM).

In broadcasted footage of the parade, which was held to mark the 75th anniversary of the ruling Workers’ Party, KCTV described the Strategic Force as “ready to take on a strategic task at any time using the most aggressive measures while armed with the faithful nuclear arsenal” of the party.

The Strategic Force is an independent branch of the North’s military that has received extensive attention from its leaders in recent years due to its integral role in the regime’s survival strategy.

Though the branch was mentioned publicly as the Strategic Force in 2014, its roots lie in the so-called Missile Guidance Bureau that was reconstituted from a variety of different artillery divisions of the North Korean military in the early 2000s.

According to South Korea’s Defense Ministry, Pyongyang established the bureau in 2003 in order to consolidate the command structure for missile units and expedite the development and deployment of its newer missiles.

By the end of the decade, the bureau was in charge of a growing arsenal of medium-range ballistic missiles after successful tests of the Taepodong-2 missile and Unha-2 rocket.

After Kim Jong-un succeeded his father as the regime’s supreme leader in late 2011, the bureau was apparently renamed to the Strategic Rocket Command, with Kim Rak-gyom appointed as its commander as a two-star general.

According to a report from China’s state-run Global Times in 2013, the command at the time was constituted of nine brigades, each with around two to three thousand troops.

In a report on North Korea’s undeclared missile operating bases published in 2018, the U.S.-based Center for Strategic International Studies (CSIS) said the Strategic Rocket Command was reorganized into the Strategic Force in 2013 in tandem with infrastructure upgrades at various missile bases.

CSIS described the operation of the country’s missile arsenal as being deployed along three “belts” — tactical, operational and strategic — depending on their distance from the demilitarized zone.

The regime’s most formidable weapons, the Hwasong family of ICBMs, are likely to be operated from the rear, the report added.

Kim Jong-gil’s appointment to lead such a force, at the rank of a three-star colonel general no less, indicates the Strategic Force has made significant strides in advancing the capacity of the county’s missiles during the past few years.

Few other details are known about him. He held the rank of a one-star major general in the Korean People's Army since 2015, before he was made a colonel general this May. 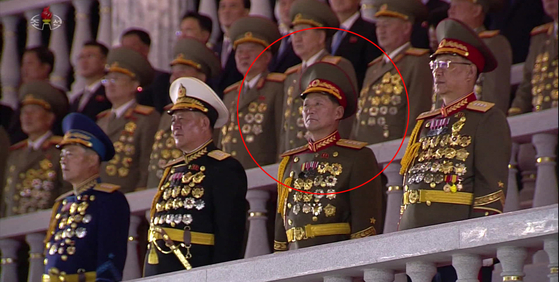 
Saturday’s parade also demonstrated that four-star Army General Pang Doo-seob had replaced Pak Su-il as chief of the General Staff Operations Bureau, the No.4 position in the North’s military. Pang was featured overseeing the parade standing next to Kim Su-gil, the director of the General Political Bureau of the Korean People’s Army and the country’s No.1 military figure after Kim Jong-un himself.