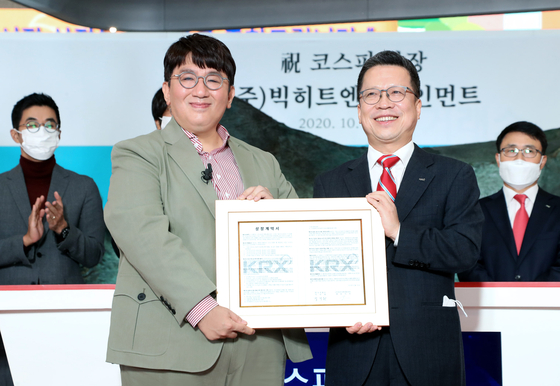 
Big Hit Entertainment hit the upper price limit on its first day trading on the Kospi, but quickly lost steam as investors turned to short-term profit taking rather than backing the entertainment company for the long term.

The stocks then shot up another 30 percent — the intraday upper limit — hitting 351,000 won recording a full 160 percent daily increase of its offering price.

As soon as hitting the ceiling, however, investors quickly sold off shares to get the most out of the 160 percent margin.

In the afternoon, the price started to go down, ultimately trading under its debut price of 270,000 won.

Analysts say that the valuation of Big Hit Entertainment shares exceeds what the company is currently capable of, which is why the shares weren't as hot as expected.

"Big Hit Entertainment is different from other entertainment labels as it vies to do more than just manage celebrities, and the valuation was created based on that premise," said Kim Hyun-yong, an analyst at Hyundai Motor Securities.

Big Hit Entertainment's long-term plan is to merge entertainment and IT through its platform Weverse, where artists and their fans can communicate, as well as stream concerts and sell merchandise.

"But that's not realized yet. Its business so far is not so different from other entertainment agencies, and compared to that, its share valuation is a bit too high which is why the price slipped in the end."

Big Hit's stocks were trading at 50 times its projected earnings for 2021, while the same figure for other entertainment agencies represented by JYP, YG and SM is between 30 and 40.

Trade volume for Big Hit on Thursday was sizable, recording 6.5 million, meaning that the the shares didn't stay in the hands of a single investor. The trade volume of SK Biopharmaceuticals on its first day recorded 700,000 and for Kakao Games, 560,000.

Market capitalization of Big Hit comes in at No. 33 on Korea's main bourse as of Thursday, recording 8.7 trillion won.

"Big Hit has proved enough with its K-pop management. It is time for them to show what they can do with the Weverse platform and create more valuable content. Then they will be able to push further with the share price as well." analyst Kim said.