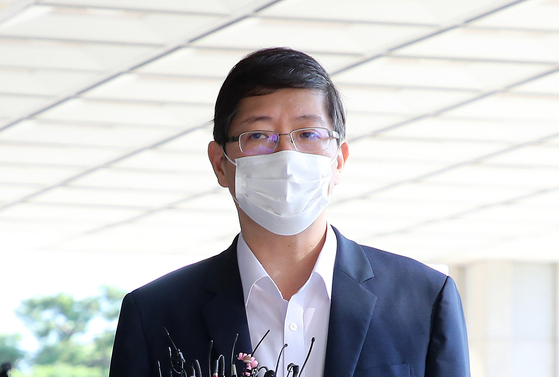 
The prosecution has indicted a group of lawmakers, including Rep. Kim Hong-gul, the youngest son of late President Kim Dae-jung, on charges of violating election laws during the latest general elections.

Prosecutors announced Thursday that Kim had been charged the day before, on the eve of the expiration of the six-month statute of limitations for election law violations stemming from the April 15 general elections.

According to the prosecution, Kim, who originally won a seat in the 21st National Assembly as a proportional lawmaker from the ruling Democratic Party (DP), was indicted on charges of making public false information about his wealth during the campaign.

The prosecution said Kim was indicted for omitting information about his wife’s real estate properties when he disclosed his wealth to the National Election Commission as a part of his candidacy registration process.

The DP expelled him last month, and he was also suspected of making speculative real estate investments. Now an independent lawmaker, Kim has denied the charges.

A lawmaker convicted of any election law violation resulting in a prison term or a fine of more than 1 million won ($870) automatically loses his or her seat.

According to the Public Official Election Act, providing false information to the public is punishable by up to five years in prison or by a fine of up to 30 million won.

Several other lawmakers formerly or currently affiliated with the DP were also indicted this week.

According to the prosecution, Rep. Lee Sang-jik, an independent lawmaker, was indicted on charges of election law violations. 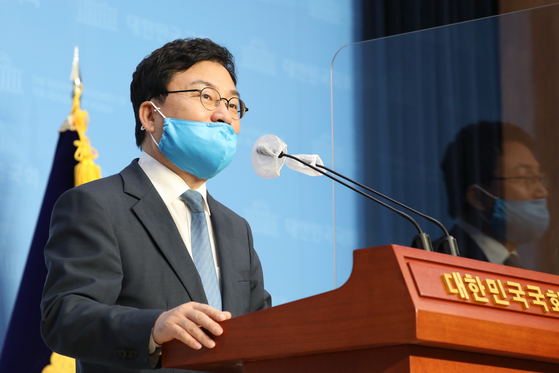 Rep. Lee Sang-jik, also the owner of the troubled Eastar Jet, holds a press conference on Sept. 24, 2020, and announces that he will leave the ruling Democratic Party. Lee said he decided to give up party membership as he faced snowballing criticisms about unethical management of the company. [YONHAP]


Rep. Lee, who is also the owner of budget airline Eastar Jet, was accused of offering gifts to hundreds of voters in his constituency in Jeonju, North Jeolla, from January through September of 2019, before the official campaign period started. He was also accused of contacting voters at a religious event in February before the campaign period.

Lee has also been prosecuted for lying about his criminal history in an official campaign brochure.

After facing fierce criticism about his unethical management of Eastar Jet, Lee left the party last month. The troubled airline has so far laid off more than 600 employees without paying their monthly salaries for eight months, worth about 26 billion won. The airline reportedly owes 170 billion won in overdue payment to contractors.

As the company struggled, Lee was accused of making illegal ownership transfers to his children.

The prosecution also indicted Rep. Yang Jung-suk, another former DP member, for an election law violation. She was accused of underreporting her wealth before the election campaign.

After the allegations against her were made public, the DP expelled Yang, who was a proportional lawmaker for the ruling party, in May.

The prosecution has also indicted other DP lawmakers, including Lee Won-taeg and Jin Sung-joon, on charges of election law violations.

At least eight People Power Party (PPP) lawmakers including Rep. Bae June-young had been indicted for violating the election law as of Thursday. The party insiders worry that they may lose the power to block a constitutional amendment initiated by the DP if enough of the indicted lawmakers are convicted and lose seats.

As of now, the PPP has 103 lawmakers in the 300-seat National Assembly. The PPP will not be able to vote down a constitutional amendment if more than three lawmakers are convicted and are sentenced to punishments sufficient to lose their seats.