Across the nation, 33 people were diagnosed with the coronavirus Monday, nearly half the number of 62 new infections from the day before, the Korea Centers for Disease Control and Prevention (KCDC) said Tuesday.

Among the 33 patients, 14 were locally infected: seven in Seoul, four in Gyeonggi, two in North Jeolla and one in North Chungcheong.

Nineteen people contracted the virus in a foreign country: five from Kazakhstan; three from the United States; two each from South Africa, Ethiopia and Uzbekistan; and one each from Mexico, the Philippines, Iraq, Russia and Kyrgyzstan.

By Monday at midnight, 289 people had died in Korea, the same as the previous day, while 12,282 people had been declared fully recovered, up by 78 from the day before. 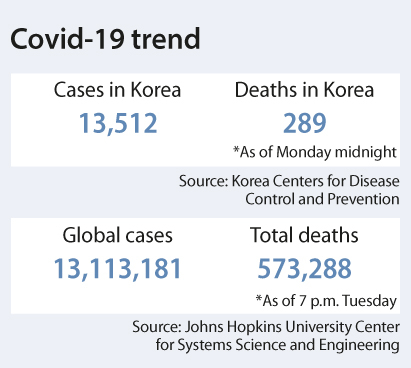 “We’re starting to see an increase in imported cases as many countries lift their lockdowns and travel restrictions, and ease preventive measures,” Jung said, continuing that now is the time to prepare for “a long-term battle.”

Jung underscored the need for various sectors in Korean society to devise ways to improve their “environment, culture and system” to “safely live” with the virus.

While no huge Covid-19 cluster has emerged in recent weeks in Korea, sporadic cases have led to a chain of infections in numerous places across the country, mostly in the Seoul metropolitan area encompassing Seoul, Incheon and Gyeonggi, as well as Gwangju and Daejeon.

No infections arose in Gwangju and Daejeon Monday, as health officials voiced optimism that their hot spots have finally come under control.

In Busan, officials said Tuesday they detected a Covid-19 patient on a Tuvalu-flagged cargo ship, and that 43 other sailors were currently undergoing virus tests. As of 2 p.m., 22 people received negative results, and the rest were expected to receive their results within the day.

The ship was said to have docked at the Busan Port on July 8, but officials said nobody had disembarked to step foot on Korean soil. All were said to be Russian nationals. The infected patient was transferred to a nearby hospital for medical treatment.