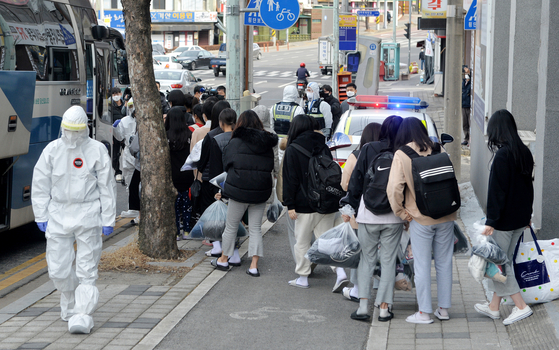 Students who were diagnosed with the coronavirus at the IEM School in Daejeon, a Christian missionary training school, board a bus Monday to be transferred to a nearby life treatment center for Covid-19 patients with mild or no symptoms. [KIM SEONG-TAE]

At least 127 Covid-19 patients have been traced to a Christian missionary school in Daejeon, health officials announced Monday, once again raising alarms on church-related clusters as the nation’s daily coronavirus cases continue to hover around 400.

Korea added 437 new cases Sunday, up from 392 the day before, the Korea Disease Control and Prevention Agency (KDCA) said.

Of Sunday’s new infections, 405 were due to domestic transmission, while the rest were imported. Over 100 cases were detected solely in Daejeon.

The new cluster in Daejeon came from the International Education Mission (IEM) School, which health officials described Monday as a Christian missionary training school unauthorized by the government and founded by International Mission (IM), a Korea-based missionary society that runs several church-related schools and facilities across the country.

According to officials, the IEM School in Daejeon selects dozens of 16- to 18-year-old students every year to teach them Christianity in addition to subjects taught in the public school curriculum. Because it’s an unauthorized school, students there have to take a state-administered High School Graduate Equivalency Test toward their senior year, the Korean equivalent to the U.S. General Education Development (GED) test. 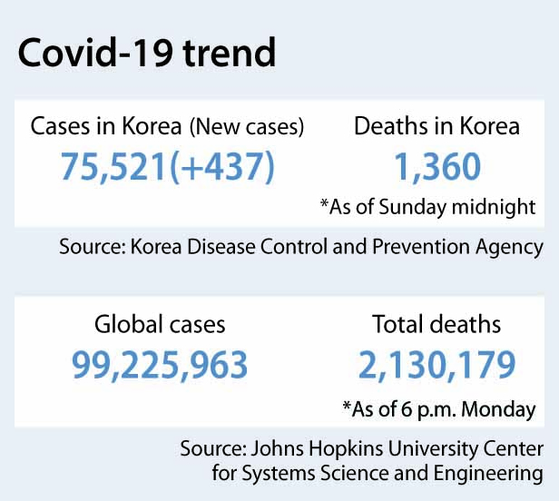 Among the school’s 122 students and 37 faculty members, all but 32 people have been diagnosed with the coronavirus so far.

Exactly how the virus spread inside the school is currently being investigated by epidemiologists, but health officials said they believe the disease was able to easily jump between students and teachers due to poor physical distancing within classrooms and dorm rooms.

All students lived in dorms, and even as several students began to exhibit symptoms of Covid-19 earlier this month, the school didn’t send them to a local Covid-19 testing site right away, Daejeon officials said. Instead, the school was said to have called the students’ parents and told them to pick up their children over the weekend to get tested. Until then, the symptomatic students were placed in separate dorm rooms but still took the same classes as the other students, infecting them, officials said.

The first person at the school who showed symptoms appear to be a student from South Gyeongsang who came down with a headache and cough on Jan. 12.

On Saturday, a student from Suncheon, South Jeolla, and another student from Pohang, North Gyeongsang, each went home to be tested and received their positive test results the next day. Daejeon health officials immediately ordered the rest of the school to be tested, and 114 more students and 11 faculty members turned out positive.

All patients have been sent to a nearby hospital or so-called life treatment center for people with mild or no symptoms. The IEM School has been shut down, and those who tested negative have been placed under self-quarantine at their homes.

Health officials vowed to probe the IEM School in Daejeon and look at other missionary training schools founded by IM in search for similar cases.

Among 437 people who were diagnosed with the coronavirus nationwide Sunday, 405 were due to domestic transmission. There were 125 new cases in Daejeon, 91 in Seoul, 72 in Gyeonggi, 19 in Busan, 15 in Gwangju, 14 each in Daegu and North Gyeongsang, 13 each in Incheon and South Chungcheong, 11 in South Gyeongsang, eight in North Chungcheong, three each in Gangwon and South Jeolla and two each in Ulsan and Sejong City.

The remaining 32 cases were imported — seven from the United States, five from Indonesia, four from Russia, two each from Britain, Poland and Tanzania as well as one each from China, Myanmar, the United Arab Emirates, France, Bulgaria, Denmark, Turkey, Mexico, Cameroon and Ghana.

Eleven patients died Sunday, raising total deaths to 1,360, while 426 patients recovered, bringing total recoveries to 62,956. As of Sunday at midnight, Korea had counted a total of 75,521 Covid-19 patients.