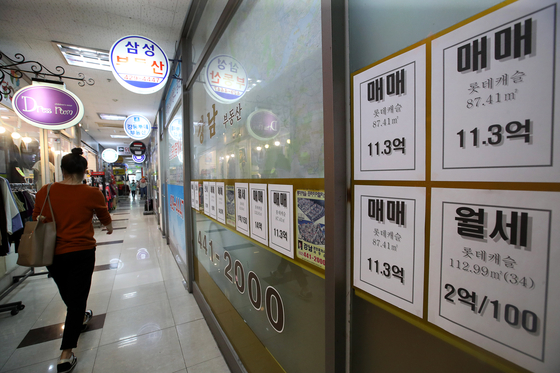 
A shortage of apartments available for jeonse, or long-term leases, continues to worsen, affecting tenants across the country.

According to Asil, a local real estate information provider, of the country's 1,798 apartment complexes with more than 1,000 units, 22 percent currently have no jeonse offers at all. Roughly 72 percent have fewer than five jeonse offers.

Gangdong Lotte Castle First, a popular apartment complex in Gangdong District, eastern Seoul, with 3,226 units and a maximum height of 34 stories, had no available jeonse offers in the past two months.

“There are so many people waiting [for an apartment] but no one can guarantee when its jeonse offers would be available,” a real estate agent near the apartment complex said. “Even when some of them are up, people take them right away so that we don’t even have to advertise them.”

The situation has largely been attributed to the government’s tenant protection legislation that passed the National Assembly in July. One of the laws allows tenants to automatically extend the two-year jeonse contracts for another two years. Landlords will only be able to refuse extensions if they are moving into the units themselves.

“Assuming that a 84-square-meter [904.2-square-foot] flat is available for jeonse, people have to pay an extra 200 million won [$174,000] compared to two months ago,” added the agent, referring to the average of a recent spike in jeonse prices.

The average jeonse price of an 84-square-meter apartment flat in Gangdong District is currently around 850 million won, up 42 percent compared to the June-July period.

The shortage of jeonse has also expanded beyond Seoul, becoming a nationwide issue.

According to data from Asil, Gyeonggi is home to 561 apartment complexes which have over 1,000 units, 73 percent of which have fewer than five jeonse offers each.

And zero jeonse offers are available for World Meridian World City apartment complex in Ulsan, which is home to 2,686 households.

The jeonse shortage problem also appears to be causing distortions in the overall real estate market.

The Hyangchon Humansia 1 Danji apartment complex in Namdong District, Incheon, which has about 3,209 units in total, currently has no jeonse offers. Yet a total of 155 apartment flats are up for sale, as many landlords are withdrawing their jeonse offers and either selling apartments or shifting them to monthly rents.

Ironically, despite many flats going on the market, sale prices continue to rise.

“Tenants who are anxious about rising jeonse prices are now purchasing apartments, which causes an increase in apartment sales prices,” said a real estate agent near the apartment complex.

A 34-year-old Seongsan Siyoung apartment complex in Mapo District, western Seoul, is now waiting for a redevelopment plan. Despite its old and outdated buildings, the apartment complex is very popular among newlyweds and office workers, given its proximity to a subway station. The jeonse prices of the apartments, which had always been relatively low, at about 200 million won, are now also rising rapidly following the government’s tightened real estate regulations.

A 59-square-meter flat in the complex was recently sold for about 300 million won. The same-sized flat is now trading at 400 million won.

Only five flats are available for jeonse offers as of now.

“In about eight years, I raised the jeonse price by only 80 million won,” said a 39-year-old man, surnamed Choi, who owns a 51-square-meter flat in the complex. “But the price rose more than that during the past few months.”

While the government says the real estate market will stabilize shortly with its housing supply plan, which comes with the third generation of new towns, experts disagree.

“It takes at least five years for the housing supply plan to actually be realized,” Heo Yun-gyeong, a researcher at Construction Economy Research Institute of Korea, said. “Also, for the third generation of new towns, much of the new housing will be public rental housing, which would not solve the fundamental problem that Koreans are currently facing. It remains unknown whether the government’s housing supply plan could actually cool down the prolonged jeonse shortage.”