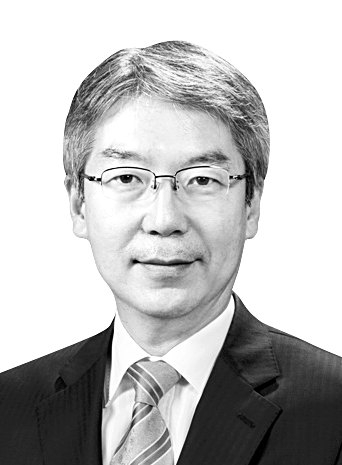 Lee Chang-wee
The author is a professor at University of Seoul Law School.

It’s been a month since Yoshihide Suga was elected prime minister of Japan. No big changes in Seoul-Tokyo relations are expected any time soon as Suga publicly stated he would inherit his Shinzo Abe’s foreign policies. But if Korea pushes through the enforcement of its Supreme Court rulings on Japanese companies to compensate Korean victims of wartime forced labor, the story will be different. Japanese media recently reported that Suga would not attend a Seoul-Beijing-Tokyo summit hosted by Korea later this year unless the Korean government guarantees it will halt the liquidation of assets owned by Japanese companies.

What meaning does Japan hold for Korean politicians? It’s difficult to understand Seoul-Tokyo diplomatic relations without knowing the answer to this question. When historical issues between the two countries were raised during the Kim Young-sam administration, the Korean president boldly said he would “fix Japan’s bad manners” — before the 1997-98 Asian financial crisis hit the country.

Kim Dae-jung opened a new era for Seoul-Tokyo cooperation by signing the “Kim Dae-jung-Obuchi Joint Declaration.” Presidents Roh Moo-hyun and Lee Myung-bak both raised their approval ratings using the Dokdo controversy, but it came at the cost of frayed ties. Former President Park Geun-hye signed a “comfort women” deal with Japan, but it was scrapped by President Moon Jae-in.

Most former presidents — except Kim Dae-jung and Park Geun-hye — face criticisms for politically exploiting Seoul-Tokyo relations. It’s worrisome to see the Moon administration and ruling Democratic Party (DP) shake Korea’s foundation of diplomacy by reigniting anti-Japanese sentiment. Bilateral relations are currently in the worst condition ever, and the Korean government not doing anything about it could detrimentally boomerang.

Diplomacy always involves a counterpart, which is why there’s no such thing as an absolute victory of any side. It goes against the international society’s common sense for Seoul to demand an apology from Tokyo every time a new president arrives at the Blue House. International disputes can be settled by a feasible agreement through international law. 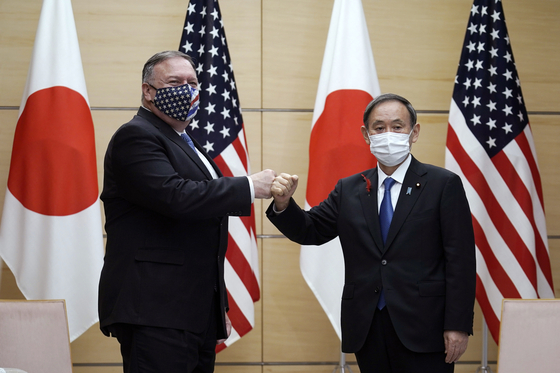 Japan’s Prime Minister Yoshihide Suga, right, and U.S. Secretary of State Mike Pompeo, left, greet each other prior to their meeting at the prime minister’s office on Oct. 6 in Tokyo. [AP/YONHAP]

The issues of Dokdo, forced labor and comfort women cannot be solved by a Korean government constantly whipping up sentiment. Even if both countries reach an unsatisfying agreement, Korean politicians must have the courage to convince their people to accept it.

The forced labor issue — which led Tokyo to take economic retaliation against Seoul — ultimately comes down to the interpretation of the 1965 Korea-Japan claims settlement agreement. Such disputes can be handled in the International Court of Justice (ICJ) or by passing it on to international arbitration. Korea’s Supreme Court ruling that forced laborers have to the right to claim compensation despite the 1965 agreement needs to be judged by the international society.

The same goes for the comfort women deal. Let’s think about the results of President Moon’s decision to scrap it. When the agreement was signed in December 2015, an apology relayed by then-Prime Minister Abe acknowledged Japan’s accountability based on international law, and the deal included substantive compensation.

There’s no legal justification to reject the agreement, not to mention doing so is a violation of the doctrine of estoppel — a legal principle that prevents someone from going back on their word. What do we gain from behaving like this? Nothing but diplomatic breakdown — and public anger against DP Rep. Yoon Mee-hyang, who faces allegations she exploited survivors.

Most other developed countries respect the principle of judicial restraint. That’s why Tokyo is chiding Seoul for violating international law. For a country that has the 12th largest economy in the world, it’s a lame excuse for the Korean government to cite judicial independence.

Seoul-Tokyo relations are, of course, muddled by complicated history and emotion. But Northeast Asia’s current diplomacy and security situation does not have the luxury of time for this.

The North Korean nuclear crisis is ongoing and the Quadrilateral Security Dialogue is developing into a security alliance without Seoul. There’s no such thing as an eternal friend or foe in the international society — there’s only eternal national interest.