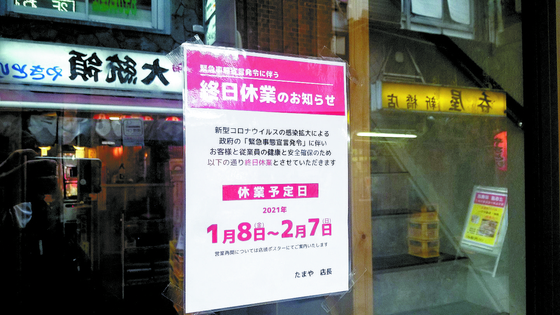 A sign is posted on the window of a restaurant in Shinbashi, Tokyo, on Jan. 15. It says the restaurant will close until the city government lifts its emergency declaration to fight Covid-19. [YOON SEOL-YOUNG]

A man who lives in Tokyo has had a strange experience at a bar. It was 8 p.m., and the owner started to close the bar. The owner told several patrons inside that he would secretly run the business till 10 p.m., but demanded customers pay in cash. It was shortly after an emergency was declared in Tokyo on Jan. 8.

On a Friday afternoon, I visited the back alleyways of Shinbashi, where office workers frequently go. Half of the restaurants were closed. There were signs reading they would close until the emergency status was lifted. The owner of two small bars there decided to close one of them. He made the decision after learning that the provincial government would pay 1.86 million yen ($17,900) in full if a business closes.

Application terms are not even strict. Regardless of the operation loss or size of the business, restaurants get nearly $18,000. While there are no official statistics, it is estimated that many businesses reduced their business hours thanks to the gigantic “carrot.”

Meanwhile, there is no “stick” as there is no legal grounds for imposing fines or administrative actions.

The Japanese government is using an enormous amount of tax money even as businesses pretend to close to take subsidies or secretly operate, because it only wants to “put out the fire” first. Last year, it took months to pay government subsidies to those who needed them. The policy had little effect and the Japanese government is traumatized by the experience. The minister in charge of Covid-19 response emphasized speedy action, claiming it was too broad an operation to calculate business losses and offer subsidies.

Urgency can be felt. Ten days have passed since the emergency was declared, but Tokyo alone sees around 2,000 cases daily, which amounts to about 7,000 nationwide. PCR tests fluctuate from 20,000 cases a day to 100,000 cases.

As the city cannot trace infected patients precisely, the level of disease control is collapsing.

What’s more urgent is that the Tokyo Olympics are approaching. Last year, it decided to postpone the Olympics by one year. If the emergency is to be extended, the Suga government’s expiration date will likely come faster than expected.