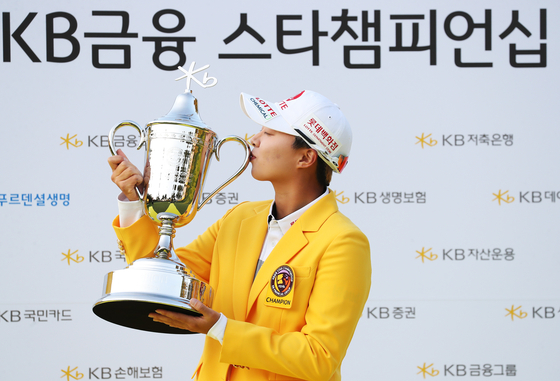 
Kim Hyo-joo picked up her second win of the season at the KLPGA Tour’s KB Financial Group STAR Championship at Black Stone Ichon in Icheon, Gyeonggi, on Sunday.

Having started the final round 10 shots ahead of the runners-up, Kim successfully maintained her lead at the top and finished the tournament with a four-round total of nine under par, 279.

Kim didn’t get off to the best start as she had bogeys on the par-4 second and the par-4 fourth. She quickly added her first birdie of the day on the par-4 sixth but added two more in the second half of her round — par-4 11th and par-5 18th — to finish the tournament at three over par.

Despite an over-par round, Kim still finished the tournament at the top eight shots ahead of runner-up Ko Jin-young.

Although Kim shot three-over par on the final day, she was still the only player in the field to have shot under-par rounds in the first three days. Looking at the four-round total, Kim and Ko are the only two players to have finished under-par.

By winning the KLPGA Tour’s last major tournament of the season, Kim took home the prize money of 240 million won ($210,000). Along with that, Kim picked up her second win of the season.

Kim won the Lotte Cantata Ladies Open when she was an amateur in 2012, while she won the KB Financial Star Championship in 2014.

World No. 1 Ko finished second with a four-round total of one under par, 287. Having missed three majors on the LPGA Tour, Ko stayed in Korea playing in five KLPGA Tour events this season due to the coronavirus pandemic.

Sole runner-up finish this weekend is her best finish this season and Ko will now be heading to the United States to compete at the Pelican Women’s Championship, which starts from Nov. 19 in Florida, and the U.S. Women’s Open, which is set to start Dec. 10 in Texas.

Despite staying in Korea and playing in a limited number of tournaments, Ko still managed to maintain the top spot in the world ranking. However, there has been a change in world No. 2, where Kim Sei-young made her way up with her first major title at the KPMG Women’s PGA Championship on Oct. 11.

While Ko is expected to complete her season on the LPGA Tour, the KLPGA Tour will continue its season with 2020 Huencare Ladies Open at South Links Yeongam, starting from Oct. 22 to 25.