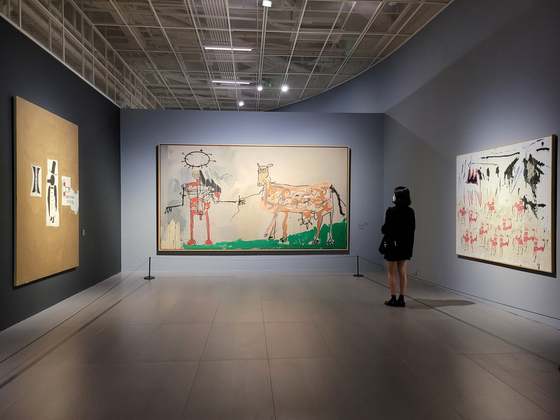 ’Jean-Michel Basquiat - Royalty, Heroism, and the Streets“ exhibition runs at the Lotte Museum of Art in southeastern Seoul through Feb. 7, 2021. [MOON SO-YOUNG]


"We will be a new Basquiat" is a lyric from the song "Basquiat" released by the popular K-pop boy band Pentagon in June.

Jean-Michel Basquiat (1960-1988) is an American artist of Haitian and Puerto Rican descent, who started as a defiant street artist, became an art star sought after by established art institutions and then died young. He might be one of the most influential visual artists for K-pop bands and their fans. V, otherwise known as Kim Tae-hyung, a member of the world star band BTS, and T.O.P, Choi Seung-hyun, from the superband Big Bang have both expressed their love for Basquiat's paintings.

Accordingly, it is no surprise that two other K-pop star fans of Basquiat — Chanyeol and Sehun from the boy band Exo — recorded an audio guide for a new large-scale retrospective of the American artist in Seoul, "Jean-Michel Basquiat — Royalty, Heroism, and the Streets," which is running at the Lotte Museum of Art. The exhibition features 150 pieces of Basquiat's paintings, drawings and sculptures from the extensive collection of Jose Mugrabi, an Israeli businessman and art collector. 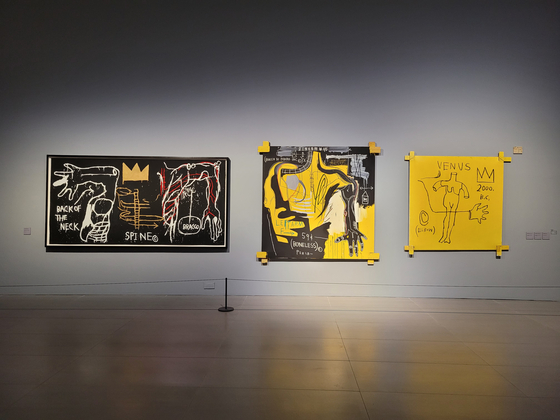 The view of ’Jean-Michel Basquiat - Royalty, Heroism, and the Streets“ exhibition at the Lotte Museum of Art in southeastern Seoul. [MOON SO-YOUNG]


The exhibition offers insights into why Basquiat fascinates K-pop artists and their fans.

The "King of Cool" section shows that the visual artist was inspired by a variety of music, in particular music of African-American origin like jazz and soul. The "Icon" section focuses on the motifs that repeatedly appear in Basquiat's paintings like a crown, a dinosaur and a halo, which can be associated with heroism and stardom pursued by the artist. And the "Portrait" section highlights the non-Western heroes directly and indirectly depicted in his works, like athletes and musicians of African descent. The pop-music-like qualities and self-awareness as an ethnic minority must have been inspiring to K-pop bands.

In addition, Basquiat's works are pleasant to look at; they are not extremely dark, provocative or horrible although they often suggest anger against racism and thoughts about violence and death. Actually, many of them look simply stylish against white walls. Both merits and limitations of his art resulting from such characteristics are in accordance with those of K-pop. 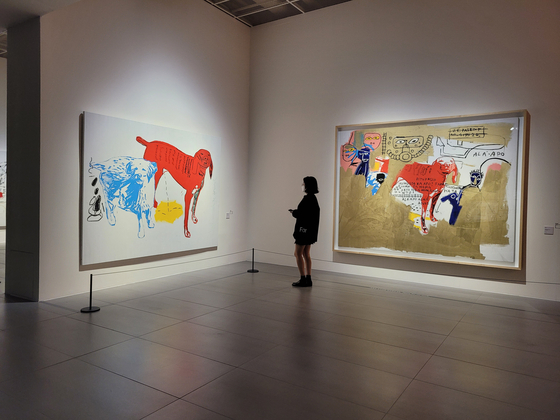 Collaboration works between Jean-Michel Basquiat and Andy Warhol on display as part of the exhibition. [MOON SO-YOUNG]


One of the most interesting parts of the exhibition is the "Andy Warhol and Jean-Michel Basquiat" section. It features some works of a collaboration between Basquiat and the iconic pop artist Andy Warhol (1928-1987), whom Basquiat admired, and a photo archive about their relationship.