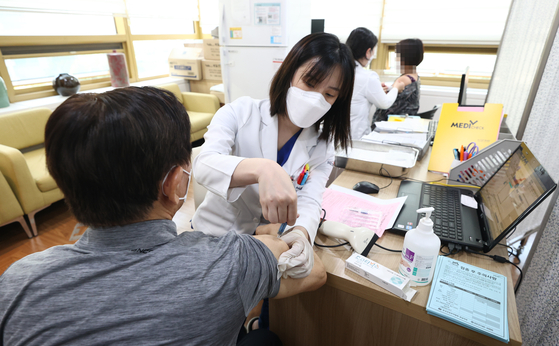 A doctor at the Gangnam branch of the Korea Association of Health Promotion in Songpa District of southern Seoul gives an influenza shot to a patient on Monday. [YONHAP]


A teenage boy died after getting a flu shot and public health authorities are trying to find out why.

“A 17-year-old male resident of Incheon, who received a free flu vaccine on Wednesday, died Friday morning,” Jung Eun-kyeong, commissioner of the Korea Disease Control and Prevention Agency (KDCA), said Monday. “He did not show any abnormal symptoms before or after receiving the flu shot.

Last month, the KDCA sent jitters across the nation when it announced that a government project offering free flu shots to the nation’s vulnerable populations, including the elderly and children, would be halted after health authorities detected problems in deliveries. It turned out some vaccines distributed by Shinsung Pharm were left at room temperature as they were being shipped to medical facilities, instead of being refrigerated.

“The deceased teenager received the flu shot under the state-run program,” Jung continued. “He got the vaccine distributed by Shinsung Pharm. It, however, was not the batch that was supposed to be recalled. We confirmed that there was no problem during the delivery process of the vaccine that he had received.”

Following the boy’s death, Jung said the government is checking on other people who received the vaccines from Shinsung.


According to the KDCA, 353 people have reported abnormal symptoms so far after receiving the influenza vaccine this year. Among them, 229 got flu shots under the free government program.

The death of the teen was reported as the government resumed Monday the free flu vaccine program for people who are older than 70. 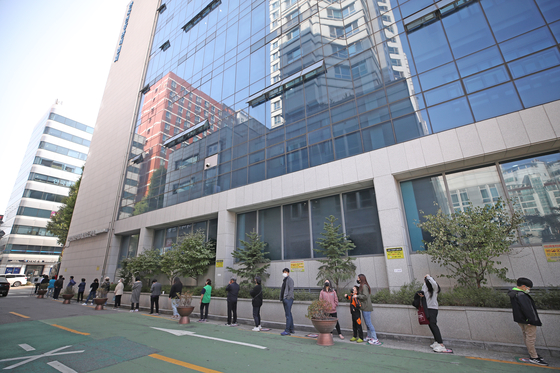 A long queue is formed by people waiting for flu shots outside the western branch of the Korea Association of Health Promotion in Gangseo District of Seoul on Monday.


According to the KDCA, people who were born before Dec. 31, 1950, are eligible for the free vaccine at clinics and public health offices nationwide starting Monday. Starting Oct. 26, free vaccines will be offered to people who are 62 to 69 years old.

The KDCA started offering free flu shots to the younger populations aged between six months till 18 years old starting Sept. 8, but the program was halted on Sept. 21 after the faulty delivery process was discovered. The government said it has recalled all possibly faulty vaccines as of Oct. 12. The program was resumed on Sept. 25.

The free vaccine program for the elderly was supposed to start on Oct. 13, but was postponed to this week.

According to the KDCA, 9.55 million people have received flu shots as of Sunday. Among them, 5.11 million were under the government-sponsored program.