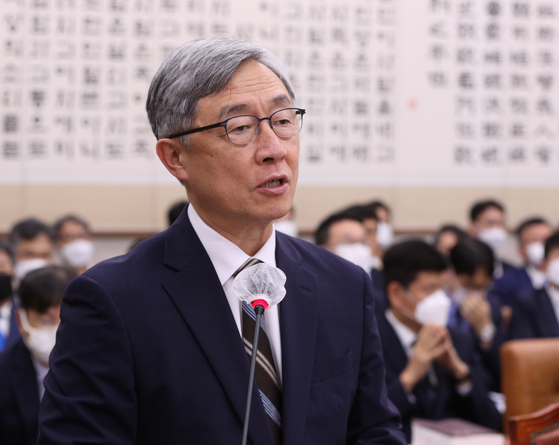 Choi Jae-hyung, head of the Board of Audit and Inspection, gives a business report at the National Assembly on July 29. [NEWS1]


“I hope you fulfill your duty as a constitutional institution by maintaining a firm stance not affected by unjust intervention or negative compromise and carrying out strict inspections without acknowledging any sanctuary,” said Lee Hoi-chang, upon becoming the head of the Board of Audit and Inspection (BAI) on Feb. 25, 1993.

Executives and employees wearing ID cards on the left side of their suits listened to his speech, standing at ease. The inauguration ceremony signaled changes to the Board of Inspection, where an authoritarian military hierarchical culture prevailed. For the next nine months, the Board of Inspection pushed recklessly ahead.

Inspecting the Yulgok project and the Peace Dam, the board sent questions to former presidents Chun Doo-hwan and Roh Tae-woo, setting a precedent that presidents’ policy initiatives could be subject to inspection. It also conducted inspections on the Blue House office of secretaries and security team, which had been considered sanctuaries. It revived the authority of a constitutional agency that had nearly been invalidated. Lee’s stubborn refusal to live in the official residence made it possible. But it wouldn’t have been possible if former president Kim Young-sam hadn’t used the board as a means to pressure government agencies.

The term length for the head of the board is four years, relatively shorter than similar agencies in other major countries. The tenure for the comptroller general of the United States, the director of the Government Accountability Office (U.S. GAO), is 15 years. By guaranteeing 15 years, nearly twice the maximum presidential term of eight years, the comptroller general can manage the organization independently. The 15-year term has been maintained since it was first established in 1921. France likewise guarantees a tenure for the head of the inspection bureau, and Japan has seven-year term s for the similar post, according to “Study on the Normative Significance and Function of Independence” by the R & DB Foundation of the Hankuk University of Foreign Studies.

Choi Jae-hyung, current head of the BAI, has one year and four months remaining in his term, and the ruling party has begun to shake him. At the National Assembly, Yoon Ho-jung, the chairman of the Legislation and Judiciary Committee, pointed out that Choi was answering questions with his arms folded. Three years ago, the Blue House called him the right person to reinforce independence, transparency and fairness of inspection operations, but that attitude has faded.

Former President Kim Young-sam said in an interview with Hankuk Ilbo in June 1993, “It’s true that I regularly debrief the head of the BAI and emphasize inspection without sanctuary every time.”