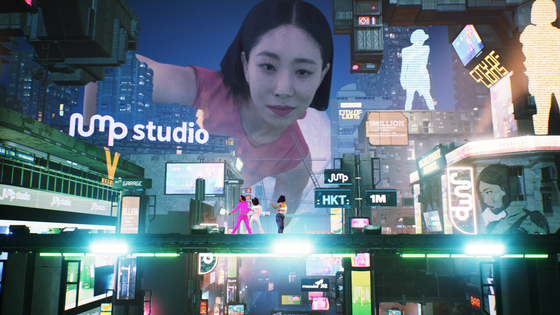 
SK Telecom will export content created from its mixed reality studio to different countries, hoping that the popularity of K-pop and interest in virtual reality (VR) and augmented reality (AR) will generate a fresh source of revenue.

The telecom operator signed an agreement with Hong Kong’s PCCW Group last week to jointly produce 5G-based AR and VR content and launch an app there designed to show videos made by the high-tech studio run by SK Telecom.

“PCCW will hold exclusive marketing rights for Jump AR and Jump VR services in Hong Kong and Macau and provide promotional benefits for 5G subscribers along with Chinese language support,” SK Telecom said in a statement.

Dubbed Jump Studio, the video production site, tucked inside the headquarters of SK Telecom in central Seoul, features virtual elements in a real-world setting, like AR, but allows a person to interact with that digital content, as in VR.


To enable the hologram-like technology, a total of 106 cameras are used in a 360-degree studio in cooperation with Microsoft to deploy the American company’s volumetric video-capture technology.

The telecom operator also plans to expand its foothold to the United States and Europe.

“We will introduce a wide variety of realistic media contents fit for the age of non-face-to-face communications brought by the Covid-19 pandemic,” said Ryu Young-sang, president of SK Telecom's mobile network operations division.

“The initial markets that we are going to target will be in Southeast Asia and then we will move to the United States and Europe,” he said.

The Jump Studio app has 3 million users, and SK Telecom aims to increase the number to 10 million next year.

It presented a wide range of content from the studio, including a 12-meter-high (39-foot-high) hologram of Choi Si-won, a member of Super Junior, during a virtual concert.

Another feature released on Tuesday involved Korean choreographer Lia Kim, who dances with multiple 3-D holograms of herself in the video.