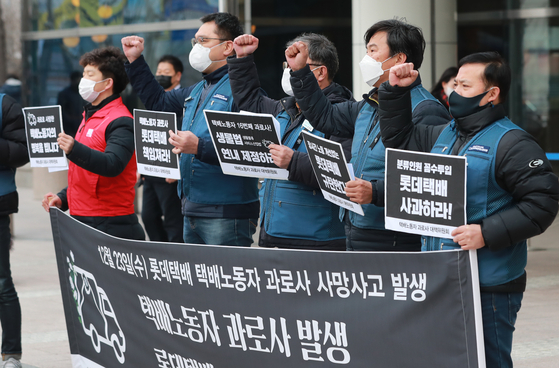 A committee designed to prevent deaths of delivery workers holds a press event in front of Lotte Global Logistics’ headquarters in central Seoul on Wednesday after a delivery worker from a contractor to the company was found dead on the same day. [NEWS1]


A delivery worker from a company contracted to Lotte Global Logistics was found dead at home on Wednesday.

The exact cause of the death was not disclosed.

“According to testimonies from family and co-workers, the deceased started work at 6 a.m. and worked until 9 to 10 p.m., delivering around 250 packages for 14 to 15 hours a day,” said the committee during a press event held in front of the Lotte Global Logistics headquarters in central Seoul on Wednesday.

“He was a healthy man who was 190 centimeters tall and weighed 110 kilograms [243 pounds], but he lost 20 kilograms in the six months since he started this work.”

The deceased started working as a delivery driver in July, but was not registered with the Korea Workers' Compensation & Welfare Service, a necessary procedure for delivery workers to sign up for industrial accident insurance.


The contractor for whom he worked should have handled that registration, and the committee says that Lotte Global Logistics is ultimately responsible for not preventing the poor management of its contractor, which is given the right to deliver the logistics company’s parcels in designated areas.

The committee pointed out that Lotte Global Logistics promised to employ 1,000 more workers to help categorize parcels at terminals to reduce delivery drivers' workloads, but not a single worker was added in Hwaseong in Suwon.

Lotte Global Logistics did not release an official statement in response to the death as of press time, but a spokesperson for the firm said that the deceased left work at around 7:30 p.m. and delivered 220 packages a day on average.

Delivery workers overworking has been a major issue since the Covid-19 outbreak, as it rapidly increased the number of parcels ordered. The Korea Integrated Logistics Association said in September that the number of parcels to be delivered this year is projected to jump more than 30 percent due to the impact of Covid-19 — much higher than the usual 10 percent.