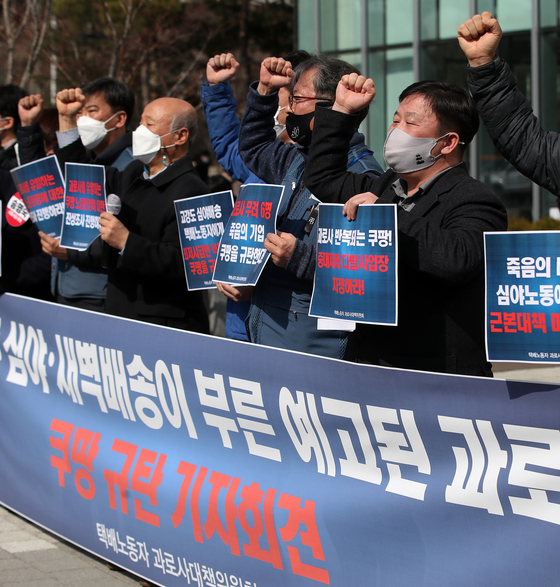 A committee dedicated to preventing deaths of delivery from overwork demands Coupang make a formal apology and offer countermeasures to prevent similar incidents at a press event held in front of the e-commerce operator’s headquarters in Songpa District, southern Seoul, on Monday. [NEWS1]


Coupang is facing another death-from-overwork claim just days before it is set for a monster listing on the New York Stock Exchange.

The e-commerce company says that the 48-year-old delivery driver was on the job “far less than the number of hours recommended by an organization” dedicated to protect these workers.

The organization brings together delivery workers and logistics companies to improve working conditions of deliverymen.

The unnamed delivery worker was found dead at a gosiwon flophouse on Sunday. He was found by police after his wife reported that she couldn’t reach her husband. The deceased’s family lives in the countryside.

“We send deep condolences and comfort to the deceased and the bereaved,” Coupang said in a statement on Monday. “The company will do its best to actively take part in finding out the reason for the deceased’s death and reduce the bereaved’s pain.”

Coupang added, “The deceased last came to work on Feb. 24. He was on a seven-day holiday. He passed away while he was not on the job. He was scheduled to return on [March] 4,” but he did not return.

The worker delivered packages during the nightshift at a distribution facility in Songpa District, southern Seoul.

Coupang said he worked four days a week on average over the previous 12 weeks. That is around 40 hours a week, far lower than the 71 hours delivery drivers work on average, according to a survey conducted by a committee formed to prevent the deaths of delivery workers.

Delivery workers argued on Monday the death was caused by overwork and demanded Coupang apologize and come up with measures.

“A special countermeasure is needed to prevent further deaths of delivery workers,” said the Committee to Prevent Deaths of Delivery Workers from Overwork in front of Coupang headquarters in Songpa District on Monday. “Coupang should come up with an official apology and measures to prevent the recurrence” of such an incident.

The committee said that death was caused by cerebral hemorrhage and a cardiac disorder, and therefore, “is clearly a death from overwork.” The committee added that the deceased worked more than 10 hours a day at night for more than a year since he started working for Coupang.

Jang Deok-jun, a 27-year-old Coupang delivery worker, was found dead in November. Coupang initially denied that the death was related to work, but the Korea Workers’ Compensation & Welfare Service, under the Ministry of Employment and Labor, acknowledged Jang’s death was work-related last month.

Last week, an office worker who managed delivery workers was found dead. The reason for his death hasn’t yet been confirmed.

Coupang’s is expected date to go public Thursday. Its pricing range is $27 to $30 a share.

Food delivery is only getting riskier