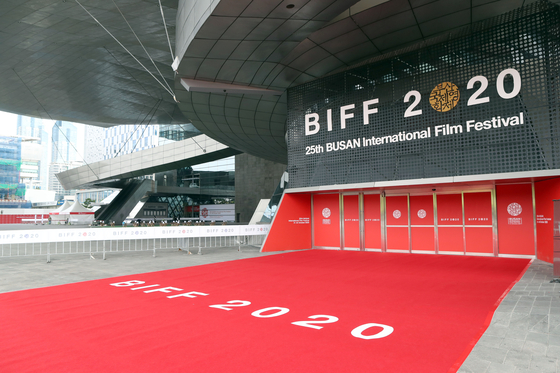 The entrance of the Busan Cinema Center ahead of the 25th Busan International Film Festival which is being held from Oct. 21 to 30 in the southern port city. [YONHAP]


The biggest annual international film festival in Korea — the 25th Busan International Film Festival (BIFF) — is currently being held in Busan, but instead of the usual hustle and bustle of an audience excited to see acclaimed films, the Busan Cinema Center, where offline screenings take place, remains relatively subdued.

However, festival fans are thankful that it went ahead at all — just a month ago at a press event, the directors hinted at the possibility of the festival being canceled altogether if the daily cases of Covid-19 refused to die down. But after the government relaxed nationwide social distancing restrictions from Level 2 to Level 1 on Oct. 12, the festival saw it as a green light to go ahead with a much scaled-down film event from Wednesday.

“Although numerous acclaimed film festivals overseas have been canceled due to the Covid-19 pandemic, we decided to host the event trusting [mature] civic awareness of the audience and our quarantine system,” said Lee Yong-kwan, the chairman of the festival’s board of directors, in a statement. “We will focus on safely hosting the festival while abiding by the government’s social distancing and preventive measures.”

True to Lee’s words, the festival has been scaled down considerably, strictly limiting the number of cinemas and audiences for the offline screenings. Instead of the average of 37 theaters, films are being screened at six theaters exclusively in Busan Cinema Center, and each film is being screened only once. Only 25 percent of the seats are filled by audience members. 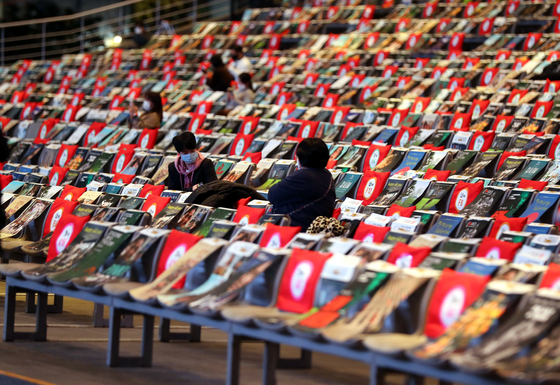 The Busan International Film Festival this year is conducted while strictly abiding by the social distancing guidelines. [YONHAP]


Opening and closing ceremonies were canceled, and the opening film “The Story of Hong Kong” was screened at the outdoor theater of the Busan Cinema Center from 8 p.m. Wednesday. The closing film “Josee, the Tiger and the Fish” will also be screened outside on Oct. 30.

This year’s event invited 192 films from 68 countries, a reduced number of films compared to the average of about 300 films the festival showcased annually. However, many prestigious films which had been invited to Cannes, Berlin and Venice this year will screen in Busan, including 23 Cannes-selected films.

As the directors emphasized at the press event, the festival this year is to focus primarily on film screenings, and most of the offline events have been canceled. However, local actors and directors invited to the festival are heading to Busan to meet the audiences for panel discussions about their films. A total of 45 sessions are to be held for films in categories of Korean Cinema Today- Panorama, Korean Cinema-Vision and Wide Angle. Audiences can also meet foreign filmmakers online for panel discussions, such as directors Kazuo Hara for “Minamata Mandala,” Frederick Wiseman for “City Hall,” Jia Zhang-ke for “Swimming Out Till the Sea Turns Blue” and Naomi Kawase for “True Mothers.”

More information about the schedules for panel discussions can be found at the festival’s main website (www.biff.kr).

The rest of the film events, such as Asian Contents & Film Market, Forum BIFF, 2020 Asian Film Awards and 2020 Asia Contents Awards, have also been moved online.