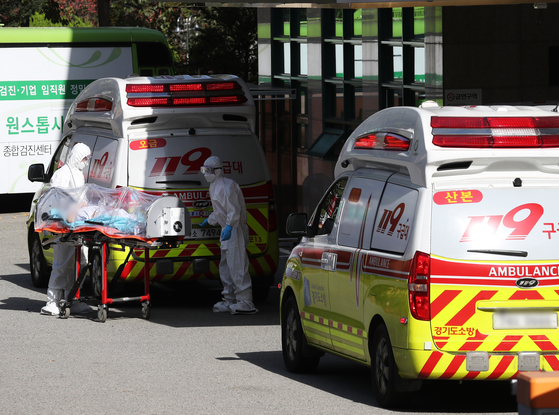 A Covid-19 patient is transported by emergency workers from an affected hospital in Gunpo, Gyeonggi, to another care center on Thursday. [YONHAP]


New coronavirus infections in Korea jumped back into the triple digits Thursday as health authorities struggle to clamp down on cluster infections across the country.

Of the 121 new cases reported Wednesday midnight, 104 occurred domestically — the highest number of infections to occur locally in nearly a month.

That put the country’s total Covid-19 caseload at 25,543, according to the Korea Disease Control and Prevention Agency (KDCA).

The number of new infections far exceeded the government’s minimum baseline for its Level 1 social distancing measures, the lowest tier of a three-level scheme rolled out in June. The baseline is an average of 50 per day over a two-week period.

Health authorities relaxed the restrictions from Level 2 to 1 on Oct. 12 after daily cases subsided to less than 60 for two weeks.

Since then there have been a series of clusters centered around nursing homes and hospitals.

Total cases linked to the SRC Hospital in Gwangju, Gyeonggi, reached 109 Thursday after two nurses and two people who came into contact with patients tested positive. The hospital is emerging as the country’s largest active hotspot, having produced its first patient only five days ago on Oct. 16.

Another medical center in Gyeonggi, Uijeongbu’s Master Plus Hospital, yielded seven new patients Thursday, trailing behind SRC as the fastest-growing cluster in the greater Seoul area with 70 total infections.

Topping that record was the cluster at Haetteurak Hospital in Busan, which reported three new infections Thursday, putting its total at 84.

Another hospital in Busan and one in Daejeon each produced three new patients, prompting local authorities to test all patients and workers at the two institutions. An additional 13 people linked to a nursing home in Anyang, Gyeonggi, also tested positive, and authorities say more patients are expected from this cluster.

The vulnerability of medical centers to Covid-19 prompted the government to begin Covid-19 testing this week on all 160,000 or so patients and workers at medical centers catering to the elderly in the greater capital area.

The tests are set to be rolled out until the end of the month, but the government hopes to expand the tests for an additional 350,000 or so patients and workers outside of Seoul, Gyeonggi and Incheon.

Yet other clusters have been popping up across the country.

So far, 10 people who visited a swimming pool in Gwanak District, southern Seoul, have tested positive for the virus, which may be linked to 29 cases that emerged from a sauna in the same complex last month.

In Cheonan, South Chungcheong, a large gathering of acquaintances has so far produced 10 infections.

According to the KDCA, the percentage of cases with unknown infection routes dropped to 12.5 percent within the past 14 days, though the share attributed to cluster infections has risen to over 22 percent.

Three more fatalities were reported on Thursday, putting the total at 453. A total of 23,647 people have fully recovered from the virus, health officials said.