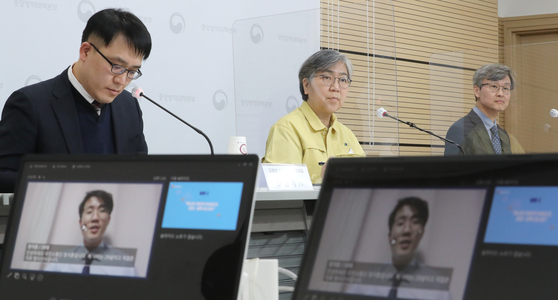 Jeong Eun-kyeong, center, commissioner of the Korea Disease Control and Prevention Agency (KDCA), answers questions from the public on Covid-19 vaccination plans in a hybrid online and in-person briefing alongside virus experts at the KDCA headquarters in Cheongju, North Chungcheong. [YONHAP]

Health authorities confirmed Monday that the first batch of Covid-19 vaccines made by AstraZeneca, enough to inoculate 750,000 people, will be received at the end of this month.

The Korean government also said that it plans to review procuring Russian-made vaccines amid concerns of possible global shortages.

The Korea Disease Control and Prevention Agency (KDCA) said that AstraZeneca is set to supply 1.5 million doses, enough to cover 750,000 people, in the last week of February through an individual contract and that the government is currently preparing its distribution and delivery.

However, there have been various concerns that the AstraZeneca vaccine, a collaboration between the British–Swedish multinational pharmaceutical company and the University of Oxford, is less effective in people over 65 in some countries, and also showed poor initial results in fighting off the South African variant of the coronavirus.

The first batch of Pfizer-BioNTech vaccines — 117,000 doses, enough to inoculate around 60,000 people as the vaccine requires two doses — is also scheduled to arrive through the Covax Facility initiative after mid-February.

In a briefing Monday, KDCA Commissioner Jeong Eun-kyeong noted that “administrative procedures” remain for the Pfizer vaccine, and said this could possibly delay its delivery.

Jeong conducted the briefing alongside virus experts Nam Jae-Hwan, a biotechnology professor from the Catholic University of Korea (CUK), and Choi Won-suk, a professor with Korea University’s College of Medicine, to address questions on vaccination plans.

Korea has secured vaccines for 56 million people, more than enough for its population of 52 million.

The Ministry of Food and Drug Safety approved a special permit to fast-track the import of the initial Pfizer vaccine batch last week.

The government has sealed separate deals with four global vaccine makers: Pfizer, AstraZeneca, Moderna and Johnson & Johnson's Janssen. It is also close to sealing a deal with U.S. drug manufacturer Novavax for vaccines for an additional 20 million people.

All the vaccines require two doses, except Janssen’s, which requires one.

The Korean government announced a vaccination plan which would inoculate medical workers, patients and staff at elderly care facilities in the first quarter; seniors aged 65 and older and health care workers in the second quarter; and the general public between ages 19 and 64 in the third quarter, starting July.

Some 50,000 frontline medical workers treating Covid-19 patients will be the first group of people to be inoculated in late February.

The KDCA said it aims to vaccinate 70 percent of the population by September and achieve herd immunity by November.

Because the elderly are among the initial groups to be vaccinated, and the AstraZeneca vaccine is among the first expected to be supplied, this could complicate Korea’s vaccination plan.

A civilian advisory panel comprised of vaccination experts found in an initial review last week that the AstraZeneca vaccine’s efficacy was similar among all age groups above 18 and that no serious side effects were seen in people 65 and older. The panel found that the vaccine can be safely administered to elderly people, though final approval should be made based on additional clinical data.

South Africa on Sunday suspended the AstraZeneca vaccine from its vaccination program because of poor results fighting mild and moderate cases of Covid-19 from a variant common there, according to an early study released last week. It was much more effective in fighting severe cases and reducing deaths.

Jeong said on concerns over AstraZeneca, “We are looking at additional clinical trial results,” adding that there will be further internal analysis of data received from the drug company and British authorities, along with a final review by the Korean Drug Safety Ministry set for Wednesday.

The AstraZeneca vaccine is cheaper than the other vaccines and can be stored at regular refrigerator temperatures, making it more easily administered.

The Moderna and Pfizer vaccines are mRNA vaccines, in which the coronavirus' genetic code is injected into the body, triggering the body to begin making viral proteins. While they have shown higher efficacy, they require tricky cold chain storage systems, with the Pfizer vaccine having to be stored at negative 70 degrees Celsius (negative 94 degrees Fahrenheit) and Moderna’s at minus 20 degrees.

The AstraZeneca vaccine is expected to roll in during the first quarter, starting late February. The Janssen and Moderna vaccines are expected to arrive in the second quarter after April and Pfizer’s in the third quarter starting July.

Korea University Prof. Choi said, “First, in terms of safety, there is no particular difference between the elderly and young people, and the safety issues were not particularly highlighted in countries that have started vaccinations before Korea.”

He added, “The problem is that when the group of people 65 years of age or older are separately analyzed in terms of effectiveness, that number is smaller than that of other vaccine clinical studies,” adding that based on data up to December, “the trend shows it is not significantly different from the overall effect.”

As supplies of Western-made vaccines are running low, some countries have been opting to purchase vaccines developed in China and Russia.

The Korean government initially said it was not looking to purchase the Sputnik V vaccines, but the KDCA on Monday said that it is open to review all options.

Jeong said, “Because there is uncertainty over the supply issue and virus variants, we plan to continue to review the need for additional vaccines.”

However, she added that there is no deal currently underway to procure the Sputnik V vaccines, and that the government is simply “leaving open all possibilities.”

A Chinese state-owned drug company, Sinopharm, announced on Dec. 30 that phase three trials showed that its vaccine was 79 percent effective. The United Arab Emirates, Egypt, Iraq, Hungary and Pakistan are among countries that have approved the Sinopharm vaccine from China.

Chinese pharmaceutical company Sinovac Biotech, is also working on a Covid-19 vaccine and is set to release the results of its phase three trials soon. Indonesia, Turkey, Brazil and Chile are among countries that have approved the Sinovac vaccine.