Government says flu vaccines are safe, will not halt program

Government says flu vaccines are safe, will not halt program 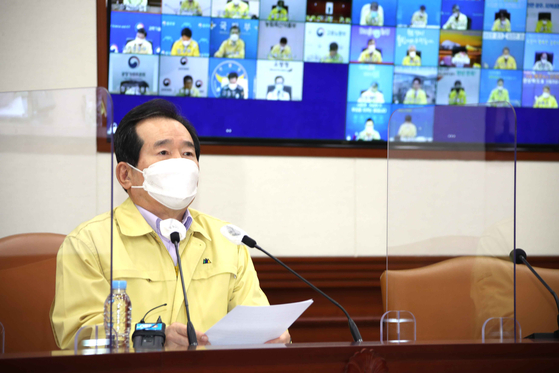 Prime Minister Chung Sye-kyun announces that the government's influenza vaccination program will continue in line with expert findings that flu vaccines are unrelated to a recent series of deaths. [YONHAP]


Prime Minister Chung Sye-kyun on Sunday announced that the government will continue its free influenza vaccination program in line with expert findings that a recent series of deaths were not related to the inoculations administered to the victims.

The remark followed a Saturday briefing by Jeong Eun-kyeong, commissioner of the Korea Disease Control and Prevention Agency (KDCA), in which she announced that a panel of experts had found little causal connection between flu vaccines and the deaths of at least 48 people following inoculations.

“Independent of [evidence of] causal links, what we do have are statistics that show deaths occurring following vaccinations.”

Jeong’s explanation, one which health officials have repeatedly stressed amid growing public concern over the safety of flu vaccines, is that attributing the recent deaths of at least 48 people, many of whom were elderly, to flu vaccines is a case of false causality.

According to the KDCA, 3.74 million elderly people over the age of 70 were administered flu shots this month, 66 percent of the total number in Korea. The majority of victims this week belonged to this age cohort, and most of them had pre-existing medical conditions.

It was the passing of a 17-year-old high school student, who died earlier this month days after a flu vaccination, that generated intense media scrutiny into vaccination safety. Dozens of deaths were reported throughout the week, raising alarm among the public already anxious after a resurgence of Covid-19 cases in recent months.

Announcing the results of a government inquiry into the deaths, Jeong said autopsies and inquiries into the existing health conditions of victims strengthened the conclusion there was no evidence of a causal link.

In particular, none of the victims exhibited signs of anaphylactic shock, an allergic reaction causing inflammation that could occur if a person is allergic to egg proteins typically used to manufacture a flu vaccine.

One common cause of death among the victims was cardiovascular disease, something which Jeong noted could be aggravated by cold weather.

“In the winter as the temperature drops, the number of fatalities resulting from cardiovascular problems increases,” Jeong said.

The fact that there have been more reports from the public this year about deaths linked to flu vaccines, Jeong said, may have arisen from a controversy over the faulty handling of some vaccines.

Another 615,000 doses of flu shots were recalled by manufacturer Korea Vaccine earlier this month after authorities confirmed that white particles were found in vaccines at a public health center in North Gyeongsang.

Both types of vaccines were recalled, but likely served to further erode public confidence in vaccinations amid the media hype over the succession of mysterious deaths.

But with evidence suggesting vaccinations pose no health hazard, the government vowed that its vaccination program would continue to prevent a mass influenza outbreak amid the continuing struggle to contain Covid-19.

“Influenza is an infectious disease as serious as Covid-19, one that claims the lives of around 3,000 people every year in our country,” Jeong said.

Chung also urged the public to trust expert opinions on the safety of the vaccines.

“I urge the [KDCA] to clearly investigate and release transparent data on unusual reactions to vaccinations that include death, but I also ask for swift and serious responses on a scientific basis toward the spread of false information that provokes public insecurity and mistrust,” Chung said.