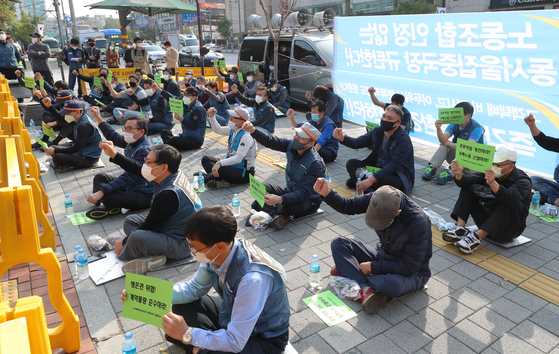 
Hanjin Transportation on Monday announced plans to ease delivery workloads following a series of deaths that could be related to stress.

Packages are usually concentrated on Tuesdays and Wednesdays, since a lot of people place orders over the weekend. In order to distribute the workloads throughout the week, Hajin Transportation plans to allow the packages that cannot not be delivered on that day to be delivered the next day. That way, the pay of delivery workers remains unchanged, since they get paid per delivery, according to the logistics company.

“The number of packages delivery workers deliver will remain unchanged, which means their pay won’t be affected,” said a spokesperson for Hanjin Transportation. “This could delay the parcel delivered to customers.”

It said it will add more workers and trucks when demand jumps, like ahead of Chuseok harvest holidays or New Years.

The logistics company also plans to add around a thousand people to sort packages at terminals.

To automate the sorting process at the terminal, Hanjin Transportation said it will invest 50 billion won ($44 million) through 2021. The company expects the automation to reduce the time workers spend on sorting packages by more than an hour.

The investment will be part of the more than 400 billion won the company plans to invest in its parcel business throughout 2023.

Making all delivery workers register for industrial accident insurance by the early half of next year is another measure Hanjin Transportation plans.

Hanjin announced the plans after it made a public apology last week for the recent death of a delivery worker, who told a fellow delivery worker that he feels extremely burdened before his death.