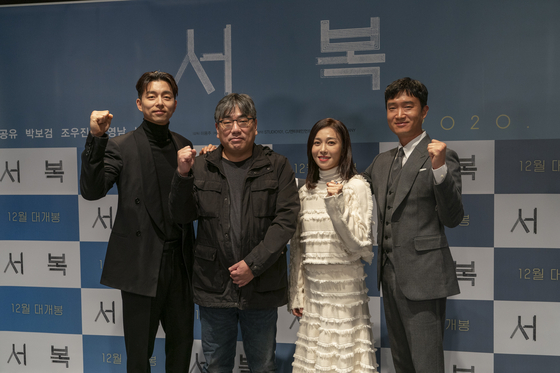 From left: Actor Gong Yoo, director Lee Yong-joo and actors Jang Young-nam and Jo Woo-jin pose for the camera at an online press event for their film "Seobok" on Tuesday. [CJ ENTERTAINMENT]


Can the upcoming sci-fi film "Seobok" be the icebreaker to thaw the frozen box office in the midst of the Covid-19 pandemic?

Well, the cast certainly looks promising. Stars Park Bo-gum and Gong Yoo are the main protagonists of the story, in which Park portrays Seobok, humanity’s first-ever human clone, and Gong Yoo takes on the role of ex-agent Gi-heon of the intelligence bureau on his last mission to deliver Seobok to safety.

While the notion of a human clone, a topic that has rarely been covered in Korean films, certainly piques the interest of avid moviegoers, director Lee Yong-joo advises the audience to not to see this topic as the central theme of his film.

“The thought that I started with [when writing the script] was humanity’s fear about mortality,” Lee said at an online press event Tuesday. “I think everyone, at some point in their life, faces that fear, and the topic of human cloning came in later.”

“It’s a desire that transcends across eras and goes back more than 2,500 years ago,” Lee said. “In this age where longevity is [no longer a novelty], or when people go to hospital when they’re sick, people are [more] concerned for their well-being and fear death. So the movie title naturally came to be ‘Seobok.’”

“Gi-heon faced a personal trauma that forced him to retire from the job, and he’s also terminally ill and facing death,” Gong Yoo said. “He was leading a very lonely, dark and painful life by himself until he was called back to the bureau for his last mission, and meets Seobok.” 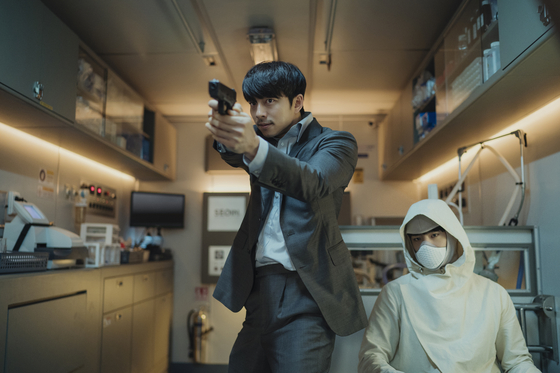 Gi-heon, played by Gong Yoo, is an ex-agent of the intelligence bureau on his last mission to transport Seobok, played by Park Bo-gum, the world's first-ever human clone, to safety. [CJ ENTERTAINMENT]


In a way, Lee views his film as a crossroad movie, when two opposite beings—one facing death while the other lives on eternally—come to connect through their time together.

“There is a certain kind of aura that Lee wanted us to have in our scenes together,” Gong Yoo explained. “He showed us a lot of footage for reference, such as ‘Rain Man’ [1988], the kind of connection that Tom Cruise and Dustin Hoffman shared. How Gi-heon and Seobok feel about each other changes during their journey, and that is a very crucial point in our story.”

“Seobok is still very young—he’s [only] 10 years old but his growth development rate is much faster than normal humans, which is why he looks like a fully grown man,” Lee said, explaining Park’s character. Park could not participate in the press event as he’s currently serving his mandatory military service as of August this year.

“At first Gi-heon treats Seobok like a child, but Seobok refuses to be treated that way,” Lee said. “Their relationship evolves as they come to understand each other and resolve stereotypes. But during that trial-and-error process, Gi-heon is flustered, frustrated and sometimes angry at Seobok.” 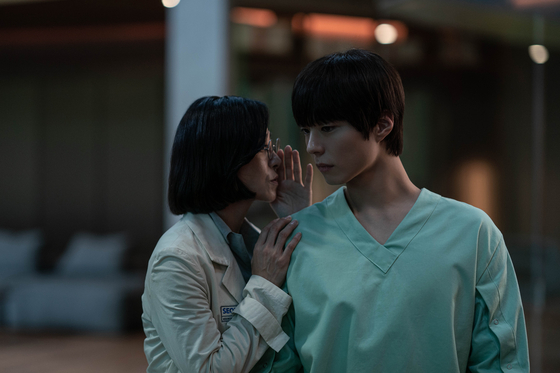 Seobok and his creator, Im Se-eun, played by Jang Young-nam, together. [CJ ENTERTAINMENT]


Lee and Gong Yoo praised Park’s performance in his absence.

“Park is usually known by the masses for his doe eyes and sweetness and kindness,” Gong Yoo said. “But I believe that the audience will be able to see a completely different side of him, and I told him afterwards that he should definitely play a villain sometime—Park’s image transformation is another attraction of this film.”

“The Park that I knew before this film was a youthful actor in his 20s rising to his stardom,” Lee said. “I casted Park for his secretive, mystique, and at first I tried to make him feel more comfortable around veteran actors. But what I felt after working with Park is that his acting is very instinctive, and his momentary concentration is very intense. When I monitored the screens I was [often] surprised by his eyes—the energy [from them] that transcended across the screens.”

Seobok and Gi-heon’s journey is far from smooth. Behind Seobok are bigger forces, one side which wants to use him to achieve immortality and the other which wishes to eradicate him as they believe no good will come from his existence.

Actor Jang Young-nam portrays Seobok’s creator, Im Se-eun, and Jo Woo-jin is Gi-heon’s former boss who is only known by his surname Ahn, who first gives orders to Gi-heon to care for Seobok, but ends up turning against the duo.

“But I wonder if, after watching the film, the audience will think of Ahn as the villain,” Lee said. “Why Ahn changes his mind is closely related to the message and the theme of this movie.”

Gong Yoo is one of the top actors in Korea, creating record viewership ratings in television and box office hits wherever he goes. When asked if there is any criteria for how he chooses what roles to take on, the actor said what motivates him are the words.

“If I read over the script and see that the writer spent sleepless nights agonizing over their words, I want to try my hand at it,” he said. “Whether or not the content will become a hit is [less important]. If the script doesn’t inspire me, I [quickly] lose interest.”

“Seobok” was originally scheduled for theatrical release in the summer, but due to the Covid-19 pandemic, has delayed its debut.

With restrictions in place for cinemas, films are turning to Netflix. Widely-anticipated films, such as sci-fi movie “Space Sweepers” or director Park Hoon-jung’s “Night in Paradise,” are rumored to be closing deals with the OTT giant, and “Seobok” may be the last big release of the year.

The films is set to premiere on Dec. 2.