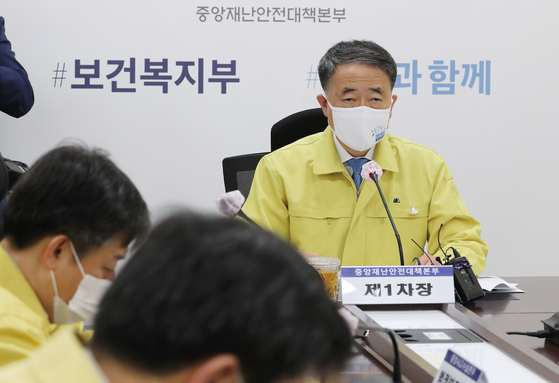 Health Minister Park Neung-hoo, right, leads a central disaster headquarters meeting in Sejong on Tuesday. Park received a flu shot following the meeting, in which he urged the public to trust expert views on the safety of influenza vaccines. [YONHAP]


Seeking to bolster public confidence in Korea's influenza vaccines, Minister for Health and Welfare Park Neung-hoo on Tuesday got his flu shot, citing medical experts who have stressed the safety of the vaccines amid ongoing concerns over the deaths of dozens of elderly people following inoculations.

During a meeting of the Central Disaster and Safety Countermeasure Headquarters in Sejong, Park said he himself would be administered a flu shot later that day, as part of the government’s free vaccination program for those over the age of 62.

“Excessive fear and incorrect information can endanger our safety, as they did in the process of combatting the novel coronavirus disease,” Park said.

The assurance from Korea’s top health official was aimed at dousing fears about potential lethality of flu vaccines after dozens of deaths — most of them involving elderly people — were reported in connection to vaccinations.

The Korea Disease Control and Prevention Agency (KDCA) previously said around 1,500 people died within seven days of receiving vaccinations last year, suggesting the series of deaths this year could also be a statistical coincidence unrelated to the vaccine.

So far, 59 deaths have been reported in Korea this month among those administered influenza vaccines, according to health officials. As of Monday, 14.68 million people in Korea have received flu shots.

The growing fatalities prompted the government last week to conduct an inquiry through a panel of experts, which concluded Saturday that there was no causal connection between the deaths and vaccines.

According to autopsy results of 46 victims released in greater detail by the KDCA on Monday, around 20 of them had pre-existing conditions related to circulation that appear to have contributed to their deaths, while the other 26 exhibited no signs indicating the vaccine had worsened their conditions.

Police suspect the death of a 17-year-old high school student who died days after receiving a flu shot may have been a result of sodium nitrate poisoning, rather than complications from a vaccination, as significant amounts of the material were found during his autopsy. The student's family, however, cast doubt on the autopsy results and the police's suspicion that the student may have taken his own life by willingly consuming the material.

Reports on the teenager's death, as well as the dozens of elderly victims that followed, generated alarm among the public that was further aggravated by unfounded rumors circulating through social media.

One such piece of misinformation, making rounds on popular online forums in Korea, alleged that flu vaccines administered in India led to the deaths of hundreds of people. No evidence exists to back up such a claim.

Inoculation numbers fell drastically after the vaccine-related deaths made headlines, the KCDA said. From 1 to 6 p.m. on Monday, 263,240 people received shots, in stark contrast to the approximately three million people who were vaccinated in the two days after the government launched its free flu shot program for those over 70.

The continuing anxiety even prompted President Moon Jae-in to promote government findings reinforcing the safety of flu vaccinations on Monday, following similar assurances from top officials and experts throughout the weekend.

Prime Minister Chung Sye-kyun, like Park on Tuesday, was administered a vaccine at a local health clinic in Sejong, as he was eligible for the free vaccination program.

Reiterating the warning laid out by KDCA Commissioner Jeong Eun-kyeong on Saturday, Park on Sunday noted the danger that could ensue if people do not become inoculated.

“Vaccines are a surefire, scientifically and historically proven method of saving countless lives,” the minister said in a briefing.

“Seasonal influenza is a dangerous infectious disease that kills around 3,000 people annually in Korea alone, so know that there are so many more benefits from vaccines than adverse effects.”