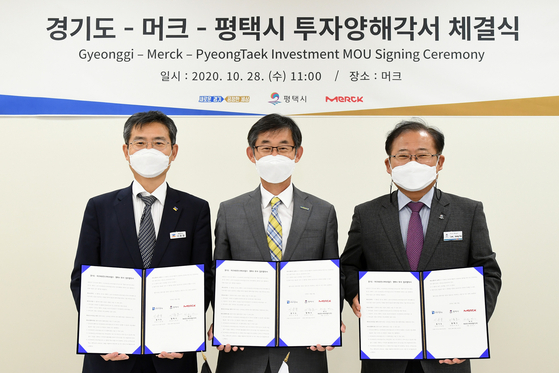 The investment will be used to expand facilities that produce material for organic light-emitting diode (OLED) displays and to relocate test cells for liquid crystal displays (LCDs) originally located in Japan. Merck executives and officials from Gyeonggi and Pyeongtaek governments got together on Wednesday to sign an agreement.

The move will expand Merck’s existing OLED material capacity in the region. Merck first started developing OLED materials 30 years ago and is a major supplier to panel makers worldwide today.

In the latest investment, a particular focus will be on building a modular production system that facilities installing more sublimation equipment for OLED material production. Sublimation is an important process in producing OLED material of high purity — a factor that decides the material’s overall quality as well as the lifetime and performance of the OLED display.

The expansion of sublimation equipment is a pre-emptive move, says Merck, intended to meet an anticipated demand increase in high-purity OLED materials as new form factors like foldable and rollable displays are on the rise.

“We are well aware that OLED materials have been defined as key materials by the Korean government. Likewise, Merck wants to increase Korea’s competitiveness in the display industry. We see our investment as a contribution to creating an agile supply chain for our customers in Korea.”

“Gyeonggi is ideal for our investment because of its proximity to our major customers and its favorable location for innovative production, excellent human resources, SMEs and universities,” said Kim Woo-kyu, managing director of Merck Korea.

Lotte E&C to partner with Vietnam on smart city project